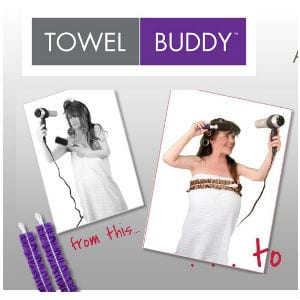 Towel Buddy is an elastic band that wraps around your towel when you get out of the shower so that you free up your hands to do other things while you’re getting ready. It seems like it would definitely come in handy as long as it works as shown.

Overview
You’ve no doubt experienced your towel coming undone at just the wrong moment. When you’re trying to do several things at once in the morning it’s often too much to have to deal with, but there doesn’t seem to be a lot of viable options, so you continue tucking your towel into itself and hoping that it holds on. The system proposed here is rather simple in nature, but see for yourself if they’ve managed to make it work.

The Claim
The makers of Towel Buddy say that this is the solution to having your towel come unwrapped after you get out of the shower. They say that the device securely fastens your towel so that you free up your hands to attend to other morning matters and getting ready tasks. They say it works because it has strong Velcro straps that will keep it in place. They also say that you can take it to the gym and you won’t have to worry about your towel coming undone at awkward moments.

They say that the elastic it uses is super stretchy, so no matter your size and shape you’ll able to use it. They also say that it’s a simple 3 step process to put it on. You simply wrap it around your back first, and then cross it over your chest so the Velcro sticks. When you’re ready to take it off you simply undo the strap and you’re good to go.

The Hype
There is a TV ad for these that will show you how they work, and show how you can get other things done in the morning or whenever you’re getting ready and you don’t have to worry about your towel giving you a hassle. They do a good job of coming up with different tasks that can be done with a towel on, like painting toenails, or doing your hair. These are generally tasks that are done post-shower when the towel can prove to be a nuisance.

The Cost
Towel Buddy is set up so that you get two of them for $26. The price point of $13 each shipping to your door is not bad, but in the case that you want to take them up on their 30 money back guarantee you’ll only be getting back the $10 purchase price and you’ll be out $16. That is not a very consumer friendly pricing structure, and places almost all of the risk on you, not the product. It should really be so that more risk ends up with the company and you don’t have to risk your hard earned money on something that may not live up to expectations. A better way to price it would be $20 for two of them plus $6 shipping, which is fair for both the consumer and the company.

The Commitment
The big draw to this product is that you don’t have to do much to put it in place, and once it’s working it should keep your towel up so that you don’t have to mess with it anymore. Consider getting a spa wrap though too, because this can provide the same benefits, the only drawback is that you will have to keep washing the wrap, whereas these are meant to be used with any bath towel so you can wash the towel and keep your Buddy handy for the next time you need it, just swapping out a dirty towel for a clean one.

Evaluation
Towel Buddy does make sense if you’re always fighting with your towel to try to keep it where you want it. They did a good job of coming up with a way to keep it in place, use any towel you want, and not have to worry about it coming undone right when you’re in the middle of something important. Because it’s using Velcro it’s easy enough to get into and out of. And of course you can wash it as well when the time comes, so you can reuse it again and again without worries.

The idea of Towel Buddy is a smart one, and it does make more sense than using a bathrobe, because a towel is actually the perfect thing to use, as long as it could always stay in place without your involvement. While a spa wrap might prove to be just as useful, it has its own limitations by needing to be washed all the time and sometimes not staying in place because it is not elastic.

Our Recommendation
The 30 day money back guarantee really means nothing here, because it’s not as if you’re going to want to pay to ship these back just to get your $10 back, so it’s a risk you’re going to have to decide to take if you want to try them out. At the same time this functions much the same way that a spa wrap does, and we could only find ones that cost about the same price as these elastic straps, and none of them had impressive enough feedback to recommend them.

What do you think? Does Towel Buddy work or not?

← Previous Does Bug Out Brella Really Work?
⚅ back to blog
Next →Does Ring Eraser Really Work?