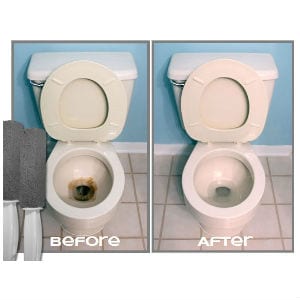 The Ring Eraser is a toilet bowl cleaner that uses pumice stone in order to clean off your toilet ring, as well as being able to be used on other surfaces like your bathroom sink – don’t worry they include two so you don’t have to use the same one. Seems like a good idea, but does it actually work in practice?

Overview
Using pumice stone on porcelain toilets is a trick that’s been around for awhile now, but many times it’s not very easy to do because pumice stones typically do not come on sticks, and if they do it’s designed to buff your feet with, not scrub your toilet. So what they’ve done here is made it in such a way that you can get your your toilet ring easily, and you don’t have to repurpose your foot buffer.

The Claim
The makers of Ring Eraser say that it instantly cuts through rust and lime build-up on porcelain surfaces because it’s use an all-natural pumice stone. This means that it won’t scratch the surface, but will be abrasive to what’s stuck to it, allowing you to clean easily in just a few seconds. They say that it’s non-toxic and better than using harsh chemicals with bleach and bleach alternatives. They say you won’t have to suffer through the fumes and the smells that these products come with, and that this stick is odor free.

The Hype
There’s not too many ways you can build hype when it comes to cleaning a toilet. They may have hyped up the before pictures showing a really gross toilet bowl ring. Hopefully your toilet doesn’t look like the one they show, as it’s pretty gross. The funny thing is that it’s called ring eraser but the toilet they show is just plain disgusting, whereas a ring is not really that gross, just something you’d want to get rid of.

The Cost
You get two Ring Erasers for $24 which includes shipping. That boils down to $12 for each one, which isn’t necessarily a bad price, but still kind of pricey when you consider what it is, and what they likely paid to manufacture it. The part that doesn’t sit well with us is that they’ve set it up so that if you try it and don’t like it and decide to use their money-back guarantee you’ll end up getting back only $10, having spent $14 to ship two pumice stone sticks.

The Commitment
This is a product that is relying on selling you the easiness of scrubbing your toilet, and nothing else. If it doesn’t save you time and effort then it isn’t worth it. If you’ve been trying to get the ring off of your toilet and have used various chemicals and cleaning agents to no avail, you will likely find that this stick powers through it because it is abrasive, but without scratching the bowl up.

Evaluation
The use of a pumice stone on porcelain surfaces is not exactly an invention by the folks at Ring Eraser. This has been in use as a toilet bowl scrubbing option for several years. But they have done a good job of making it into a shape that cleans the bowl well and adapts to its different surfaces. If you were to try to use a regular pumice stone, one that wasn’t especially designed for use on a toilet bowl, you’d likely get less than fantastic results.

They say that this works without chemicals, and that’s easy enough to see, but you’d likely still want to use some sort of antibacterial agent on the toilet and not rely on this alone to keep it clean. This would be good to blast through the ring that can form where the water rests, but it’s not going to do anything to sanitize your toilet.

The Ring Eraser looks like a good product, and would get our Solid Try rating except for the way that it is priced, which makes it a Risky Try. Basically it’s a pumice stone on a stick, which by itself might not be worth $10 each, but with the shipping tacked on it ups the price to beyond acceptable levels. We’re going to check back on this item periodically to see if the price comes down or the pricing structure changes, due to market demand. They may find that a competing product emerges that makes a more appealing offer to the consumer.

We Found It: Here is scouring stick for $2.49 that uses pumice. You could order ten of them and get free shipping from Amazon and get the same results since it specifically states it’s for use on toilets as well as several other items around your home.

Our Recommendation
It’s unfortunate that this pricing structure is set up in a way that puts a large part of the risk on you, the consumer. Let’s say you get these and they don’t work as you thought they would. If you returned them you’d be out the time and expense of sending them back, plus you’d only get $10 of your $24 purchase back because $14 of that is return shipping and handling and not eligible for a refund. They would have done better to price these at $10 each and then charge $4 for shipping, since that’s closer to the actual cost of shipping than $14. As it stands, even if every single customer asks for and is granted a refund the company will still be profiting.

What do you think? Does Ring Eraser work or not?

← Previous Does Towel Buddy Really Work?
⚅ back to blog
Next →Does 28 Day Mascara Really Work?