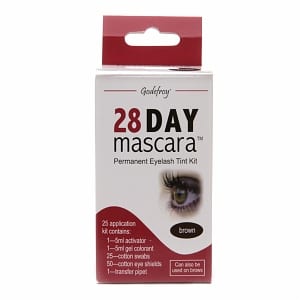 28 Day Mascara is an eyelash tinting product that is supposed to dye your lashes for up to 4 weeks at a time. For many this would make it so that they don’t have to use conventional mascara anymore, they would just need to reapply this at strategic intervals in order to keep the look going. But what are people saying about how well it works?

Overview
Having to apply mascara everyday can be a real chore, especially if you can’t go a day without it, or can’t leave the house without it. For some, mascara is a makeup essential and finding a product that would only need to be used monthly would be a big help. In order for this to be the case, you’d need to find something that is relatively easy to use, lasts through showers and daily activities for the 4 weeks, and provides results that are as good as mascara.

The Claim
The makers of 28 Day Mascara claim that it can tint your lashes and eyebrows at home, without having to go to the salon, and that the results will last up to 4 weeks. They say that it replace the need to use mascara as well as eyebrow pencils, and that it costs far less than getting these done professionally. They say it won’t fade and that it is impervious to water, so you’ll be able to shower like normal and go about your regular activities without worrying about it wearing off.

They say that it has been salon tested and that it is easy to apply and safe to use because it doesn’t contain things like hydrogen peroxide or synthetic dyes. They also say that it can be applied in a matter of minutes. They do point out that you will want to allergy test the product first before applying it fully. You can do this by trying the product out on an area of your skin that is not visible so that you can see how you react to it.

The Hype
The title alone is enough to drive thousands of women to try this product just because of the price and the promise of not having to do your eyelashes for a full month.

The Cost
You can get the full 28 Day Mascara kit for less than $20 at Amazon, and that includes 25 applications so in essence you are getting two year’s worth of product. That’s pretty impressive, and not only is it less expensive than getting your lashes tinted at the salon, it’s less than using mascara every day for 700 days.

The Commitment
This is going to involve some time and effort on your part to make sure that you get it right and that the product works as described. They say that you might want to enlist the help of a friend, and we couldn’t agree more. This would be a fun monthly meet up for you and your closest girlfriend, and since they include so many applications in one kit you both and enjoy it for a year for $10 each or so. Having a friend help means that you’re increasing the chances of a successful application, and great-looking results when you finish. Most of the complaints on the product are from those that went it alone, and there is definitely some room for human error here if you try it yourself.

Evaluation
28 Day Mascara says that it’s easy to use and apply, but the two-step process seems anything but easy, with many actual users reporting that it is a messy, complicated process. If you don’t really like applying things to your eye area, it’s likely going to be an arduous task, which is why we suggest having a friend help you out, and then you can return the favor. If you’re going to do it yourself, make sure you set aside enough time so that you can be patient and not have to rush through it. Don’t treat it like an ordinary mascara application, as it’s nothing like one.

It’s important to note that while some reported good results with it, others reported no difference at all with their lashes. If you are hoping that this will take your lashes from zero to hero you might be disappointed, as it seems to work best on lashes that already have a fair amount of color, and just makes them darker. You have to keep your expectations in check, try it out, and see what sort of results it provides rather than hoping for a dramatic turnaround and being disappointed.

28 Day Mascara works, as long as you’re willing to put the time in to get the job done right. It seems a fair trade off since you won’t have to do it very often, and the results seem to be as good as or better than using regular mascara and eyebrow pencils. It would be a total winner if they could somehow figure out how to make this as easy to apply as mascara, but last for a full month. The name implies that it is mascara, but after delving into what it actually entails, with a two-step process that involves precision, it’s a bit of a misnomer. They could call it a 28 Day Mascara Alternative, which would be more appropriate.

Our Recommendation
Bottom Line: This is something that you’ll need to commit to in order to use, but if you do it might be worth it and at the price it’s a great deal if it works for you.

What do you think? Does 28 Day Mascara work or not?

← Previous Does Ring Eraser Really Work?
⚅ back to blog
Next →Does Butterfly Abs Really Work?