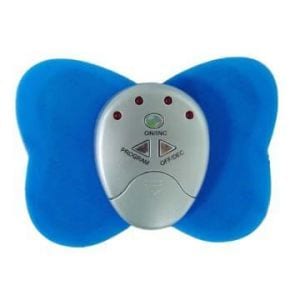 Butterfly Abs is taking a product concept that’s been around for decades and making it a little different by improving the design and making it easier to use. But can sending electronic pulses to your abs really result in a firmer abdominal wall?

Overview
There’s no two ways around it, targeting the abs using conventional exercises is no fun, which is why a six pack is so coveted. Having a toned, flat stomach involves the right mix of rock hard abs, as well as a low enough body fat percentage to show them off. Attaining this golden BFP involves a pretty serious mix of diet and exercise, unless you’re genetically gifted in this area, and even then it’s going to require a bit of work. Or maybe you can simply stick some electronic nodes to your stomach. Let’s see:

The Claim
The people behind Butterfly Abs claim that their product is FDA cleared to firm, strengthen, and tone abs. They phrase it in a way that makes it seem like the FDA is saying that this works to firm, strengthen, and tone your abs, but what they are really saying is that the device is FDA cleared to be sold to consumers. The FDA is not going to comment on what the product does, just that it is safe to use and you won’t electricute yourself. But since the FDA has a knack for getting these kinds of things wrong, it might not be the best endorsement to go on.

The Hype
The hype for this is easy to surmise: Get a six pack without doing sit-ups. Game over, no more hype needed. The universal contempt for ab exercises means that any product that tells you you don’t have to do them anymore is going to grab attention. The more it looks like it actually might work, the more people are going to be intrigued by it and hope that it’s the answer to their prayers.

The Cost
Butterfly Abs is $50 which ships it to your door. Since this is only one payment, and doesn’t involve any extra offers like buy one get one free, it’s not a bad pricing set-up. The nice thing is that you get a 60 day window to evaluate it, and that you’d only be out the $10 shipping plus whatever it costs to ship it back if you don’t like it.

The Commitment
Not having to do sit-ups and crunches is the crux of the sale here, and it’s a big enough draw that many people will try this out just in the hope that they wouldn’t have to do these grueling exercises anymore.

Evaluation
Butterfly Abs is pretty much the same as other ab belts that are designed to stimulate the abdominal muscles, causing them to contract repeatedly, which gives the same sensation that you get when you tighten your abs either from laughing or from doing sit ups or crunches. While this might give you the feeling that you’re building up your muscles, it Many people have a solid abdominal wall already, but their abs are not visible due to the layer of fat on top of them. This product will not help you lose that layer of fat, no matter how much you use it, and if you want visible ab muscles you’re better off going about it through dietary changes and more exercise.

The before and after pictures are borderline humorous because they show people going from overweight to fit and there is absolutely nothing about this product that would suggest that it helps you lose weight in any sort of way. The people in these pictures were obviously following a diet program as well as getting aerobic activity to create a caloric deficit and were also probably supplementing with other weight loss aids. Whether or not they were also using Butterfly Abs is a moot point because the results that are shown are not typical of the average use of the product, which they admit to in the fine print of course.

What’s interesting is that the same exact product is being sold as a massager, so it’s not clear which function it is better suited for. Most likely the massaging aspect has more likelihood of success, since contracting and relaxing the muscles would work better to relax them rather than build them up. The two seem mutually exclusive, and it seems that it would only work one way, and not be able to perform multiple functions on the same muscle.

Butterfly Abs is getting our Try rating as long as you’re aware that by itself it won’t produce a six-pack. But we like that you can use this on other muscles besides the abs, and it can provide a massage if nothing else. The price is just about right, it could be a little less but is on the same level as other eletric muscle stimulators, but with a nicer size making it easier to use.

Our Recommendation
We’ve seen our fair share of ab belts and electronic muscle stimulation gadgets, and the design on these is getting better and better. The butterfly design is the best we’ve seen yet, and may be worth spending a big extra if you’re bent on buying one of these devices. If you’re looking for the purely rational recommendation we’d say to avoid the purchase altogether because it will likely end up tossed away or simply tossed aside.

What do you think? Does Butterfly Abs work or not?