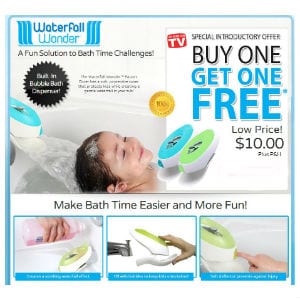 Waterfall Wonder is an attachment that goes onto your existing bathtub faucet and makes it so the water comes out in a flatened waterfall-like way, instead of straight down. They say this makes it more fun for bath time, and it even has a reservoir for bubble bath liquid. But how well does it work when put into place?

Overview
If you’ve ever had to protect your child’s head from hitting the faucet in the bathtub, you’ll appreciate this kind of product right away for solving that problem. That may be enough for it to earn its stripes, but it also has a few other features that try to entice you into a purchase, like fanning the water out to make it more fun for kids, and pleasant for adults, as well as adding a bubble bath dispenser into the mix.

The Claim
The makers of Waterfall Wonder say that it is made out of a soft protective cover that works to create the waterfall effect, and makes it so if your child bumps their head against the faucet, it won’t hurt as much. They say you can fill this up with bubble bath solution so that it makes it easy to run a bubble bath with just the right amount of bubbles, you just have to press a button to add more. It’s also supposed to fit most faucets out there, and it’s designed to snap on and snap off with a sort of alligator chomping motion.

The Hype
There isn’t much hype surrounding this, and the video they provide is a basic demonstration video filmed in one cut where they’re showing you how easy it is to put it on and take it off. There isn’t a traditional TV infomercial that is hyping this up and trying to inflate its value.

The Cost
The original cost of Waterfall Wonder starts at $10. They then add $8 for shipping and handling, and another $8 for the second one you receive so your total price comes to $26 when it’s all said and done. There really isn’t a good reason why they’ve made this a two for one offer, since most households use one bathtub for all of their baths, especially all of the kid’s baths, so it’s pretty much just to increase the total cost of your order. They point out their 30 day guarantee, but keep in mind that you’ll only get back that original $10 if you decide to return it.

The Commitment
This goes on and comes off very easily, so you can take it off when not in use. But you really don’t have to because if you want to take a shower you should be able to reach the knob that makes the shower start up without having to take this off.

Evaluation
The Waterfall Wonder is based on a simple premise: bath time is more fun when the water comes out as a waterfall, and it’s safer when the hard metal faucet is shrouded in a soft plastic. If you can get behind that concept then there’s no reason to believe that it doesn’t work, as there’s pretty much no way they could fake such a realistic demonstration of how it works. Just check out the video below and you’ll see them put it on and run the water, and show you in more detail how it works.

So the waterfall itself may not be as wide and gushing as it’s shown in the picture on their website, but this does serve one main purpose, and that’s to make the bathtub a safer place for kids. That alone is reason enough to pick it up, and the waterfall effect and bubble bath dispenser are really just icing on the cake.

Waterfall Wonder is getting our Thumbs Up rating because it creates a safer environment for your child to take their bath. If you’ve ever cracked your head on the bathtub faucet while taking your own bath you’ll know that it smarts, and this can be a way to make sure that it’s a little more bump friendly. It also take the water that would usually just fall straight down and redirects it into a more pleasing waterfall stream, which can be nice for everyone, not just kids. The bubble bath dispenser is a nice added bonus feature.

Our Recommendation
Adding on a second item is a popular way to sell products, and you can’t fault them for using it here because selling a $10 item would mean having to do a lot of volume. So you can either keep one as a spare backup, or have a friend go in on you to split the cost, because $26 is really not a bad price for two of them shipped to your door.

What do you think? Does Waterfall Wonder work or not?

← Previous Does the QuikBrush Really Work?
⚅ back to blog
Next →Does the Brew Stick Really Work?