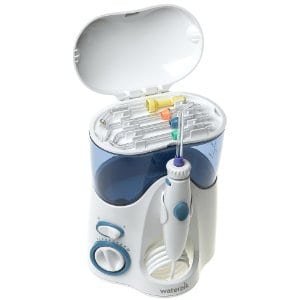 Perhaps you’re just learning about the Waterpik Ultra Water Flosser, or maybe you’ve known about Waterpik for some time now. It’s been on the market for several decades and essentially is a way to floss your teeth using water instead of dental floss. The skeptics say that this can’t work as well as dental floss, because floss goes right up against your tooth. But the makers of Waterpik say that it’s clinically proven to be better than floss. They can’t both be right so we went to work to settle the debate.

Overview
If you’re not a habitual flosser you’ve probably been chastised by your dentist at each visit. You know you should be flossing but it’s so hard to get started with the habit that many people are sporadic flossers at best. Even though we know it’s a cornerstone of proper dental care there’s just something about it that turns most people off from doing it on the daily. Since the Waterpik Ultra Water Flosser is intrinsically different than using regular dental floss, perhaps you might be able to make it a habit a little more easily.

The Claim
The claim of the Waterpik Ultra Water Flosser is that it has been clinically proven to be far superior than conventional flossing. They also say that they can clean and massage your gums. This is an often overlooked aspect to proper dental care, and many people think just brushing your teeth is enough. Brushing your gums is recommended, and the makers of Waterpik say that their unit massages and stimulates your gums to promote health. They claim that in just 2 weeks of use you can have noticeably healthier gums.

They also say that this particular model is quieter and easier to hold in your hand than previous models. Whether this is true or not is beside the point. The basic takeaway here is that they are improving upon themselves, which is commendable for any business instead of just sitting around collecting on a winning product, you make it even better and release a new model. We like that.

The Cost
The cost of a Waterpik Ultra Water Flosser is relatively cheap considering what it does. It retails for around $60. Of course that’s more expensive than buying dental floss, but it’s supposed to be more than 90% more effective, so it’s a good trade off. It uses ordinary water, so the only additional costs is the electricity it uses while it’s operating.

The Commitment
Just like you’re supposed to floss every day, you’re supposed to use your Waterpik Ultra Water Flosser every day as well. It’s not very hard to remember, as the unit itself is rather large and takes up a good amount of space on your bathroom counter top. This is a good reminder to use it, which means you’ll probably floss your teeth more often than you do now, improving your overall oral health.

Evaluation
There’s a lot of bells and whistles to this particular model, including 6 different tips you can interchange depending on what you’re going for. Although some of them don’t quite work the way you’d think they would, there are a few of them that you’re sure to enjoy using, and that will get the job done for you. Think of it as an assortment that you get to choose from to find what you like, rather than 6 tips that all have to work perfectly.

Although by the looks of it, this isn’t rocket science, don’t be fooled by looks alone. It’s not the easiest thing to create a pressurized stream of water that is thin enough to go between your teeth. They’ve been at this for a while though and have pretty much perfected the art. The pulsating effect works to dislodge foot particles, and the pressurization ensures that the water will get to places floss just can’t go. Many users have said that the amount of food particles that it removes, even after brushing and flossing with dental floss, is surprising.

It’s hard to deny that a product works when so many actual users say that it does. Firsthand I can say that the Waterpik Ultra Water Flosser takes some getting used to, but becomes easy to use and is easy to incorporate into a daily oral hygiene regimen.

You don’t mess with a good thing, and the basic design of the Waterpik Ultra Water Flosser is the same as it’s been since the 80s. Of course the technology behind it has improved, but the idea of pulsating water blasts between your teeth is still a sound one. This product gets thousands of positive reviews from those that have used it, and compared to flossing is more effective and easier to get right.

What won us over fully is the fact that it includes a tongue cleaner. More and more people are realizing the health benefits of cleaning your tongue. It should be done each time you brush your teeth for better oral hygiene and better smelling breath.

Our Recommendation
If you’re big into oral health, and really everyone should be, this is something to add to your arsenal. It’s hard to get into the habit of flossing every day, but it’s rather easy to get into the habit of using a Waterpik. It’s actually fun and feels good, as opposed to flossing that can be painful, and hard to do the way dentists recommend doing, getting the floss to go up your gum line.

What do you think? Does the Waterpik Ultra Water Flosser work or not?

← Previous Do Sonicare Toothbrushes Really Work?
⚅ back to blog
Next →Does AdvoCare Really Work?