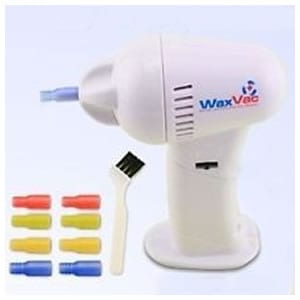 If you’ve seen the WaxVac ad on TV you are probably wondering if this mini vacuum cleaner for your ears can actually do the job. Proper aural hygiene is often overlooked compared to keeping other body parts clean, and many times it’s easy to forget about the ears for stretches of time. But this gadget is positioning itself as a way to stay on top of the task. So does it work?

Overview
The ears are one of the trickier body parts to keep healthy because there is so much conflicting advice on how to keep them clean. Some say you shouldn’t use a cotton swab at all because all you’re doing is impacting the wax and making it stick to the inside of your ear more. Others say that ear wax is the body’s way of protecting the ear from dust, dirt and other debris, so you should leave it alone and just take care of any wax that makes it out of the ear canal. And still others recommend ear wax removal systems that break up the wax and flush it out.

The Claim
The makers of WaxVac claim that this is a safer way to rid your ears of water and dirt than using a Q-Tip. They repeatedly point out that you’re not supposed to put a cotton swab in your ear canal, as this can puncture your ear drum and cause severe damage.

The Hype
This has it’s own 30 second spot on TV that exaggerates just how dangerous it is to use cotton swabs in your ears by showing a guy jam one into his ear and then scream “Ow!”. Most of us aren’t as inept as this, but there is still the possibility of going too deep when cleaning out your ears, as there’s no reliable way to tell where your eardrum is without doing damage.

The Cost
Your total comes to $24 and includes two WaxVac units. This is sold on the classic buy one get one free just pay shipping, which keeps the price down for the actual unit, but jacks up your total price. It also means that if you take them up on their offer you’ll only be getting back the $10 that it technically costs. It’s always a red flag for us when it costs more to ship a product than the product costs. By the time you ship it back to them as a return, you’re still going to be out $20 for nothing.

There’s also the possibility of being overcharged for the unit, with several complaints being filed that allege they charge more for shipping than what is stated. There’s also one user that claims they were charged nearly $100 for a deluxe upgrade. There’s still no confirmation that anyone was successfully able to return or cancel an order.

The Commitment
You’d want to use this everyday if it works. That would keep water, dirt and debris from accumulating in your ears. It appears that it would be just as fast if not faster than using a cotton swab, so it would save you a bit of time, but it would also be more effective, so it would really be cutting down on your level of commitment to ear health and hygiene.

Evaluation
There’s been a lot of debate over ear candling as to whether it works or not. This is supposed to create a vacuum in the ear canal as well and remove all of the gunk that has built up. But one of the criticisms is that it wouldn’t be safe for you to create a vacuum in your ear, as this could be just as damaging to your ear drum as puncturing it would be. The WaxVac is using the same concept of sucking out water, and although they say it’s gentle it’s still possible that you’d suck up more than just water if you don’t use it properly.

This is getting our Thumbs Down rating. There are a few areas of concern, namely that you’re taking all the risk in trying this because of the way the pricing structure is set up. Also, we’re not exactly sure that doctors would recommend using suction on your ear canal, and this seems to be just as risky as sticking a cotton swab too far. In addition to this there are several reports that they overcharge during the ordering process, and they say orders have been shipped when they haven’t.

Our Recommendation
You’ll need to determine which approach you want to take to cleaning your ears, but so far suction doesn’t seem like a winner. Although it seems like it should work, and claims to be a safe and effective way to clean your ears, we’re skeptical and were unable to find anyone that says they had a good experience with it.

What do you think? Does WaxVac work or not?

← Previous Waterpik vs. Flossing: Which Works Better?
⚅ back to blog
Next →Does Xyngular Really Work?

30 Customer Reviews on “Does the WaxVac Really Work?”