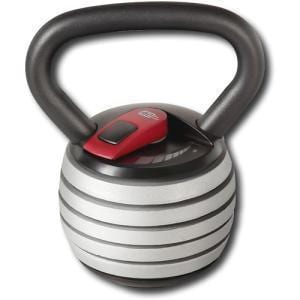 The Weider Powerbell is Weider’s entrant into the rising popularity of kettlebells and kettlebell workouts. It’s a way to have multiples sizes and weights without the added expense, and without taking up so much room. It would be a pretty innovative weightlifting product, if it actually works the way it’s supposed to, so let’s see what the verdict is.

Overview
Kettlebells have been getting a lot of attention lately among those in the fitness world. The reason is you can get a full body workout, plus get your heartrate up all at the same time. It’s great for circuit training, and other bootcamp style workouts. Kettlebell swings workout a lot of different muscle groups at the same time, and also act as a form of cardio. You can build up your strength as well as your muscle size with this. Women like using them because they can keep trim without bulking up. Tim Ferriss, author of the Four Hour Body, advocates kettlebell swings as one of the best exercises you can do to stay fit without putting a lot of time in.

The Claim
The Weider Powerbell claims that you get the equivalent of 7 kettlebells in one space-saving unit, for far less than it would cost to buy them separately. Kettlebells are usually sold by the pound, so heavier ones will cost more than lighter ones. This means that as you get up there in poundage, you can expect to pay upwards of over $60.

The Cost
The Weider Powerbell is $200, and they justify that by saying it would cost you over $300 if you tried to purchase them separately. The numbers do add up, so it’s not the worst price to pay for a complete set. Trust us, you’re going to be glad that you have varying weights, because some exercises will be too easy with a light weight, while others are too hard with a heavy one. You definitely need an assortment.

The Commitment
Kettlebell exercises are not the easiest thing to form a habit around. They are the most basic of weightlifting moves and will have you feeling like you’re in Russia training for the Olympics in the 1950s. So you won’t be winning any style points, and it’s not the easiest thing to make “fun”, so you really have to be committed to sticking with it long enough to see the results. Luckily since you’re burning fat and building muscle at the same time, you don’t have to wait too long.

Evaluation
The biggest advantage of getting a Weider Powerbell over separate ones is all the space it saves. Kettlebells are basically cannonballs with handles, not the loveliest piece of gym equipment you’ve ever seen, and not the best thing to stub your toe on either. Having a row of 7 different kettlebells would mean adorning a entire wall of your home, and wouldn’t be something you’d want showcased when company comes over. By containing the whole lot into the space of just one kettlebell, this definitely makes a home gym something anyone can justify.

As far as replicating a gym workout at home, these come pretty close. You can do kettlebell swings to work both the upper and lower body, but because of its shape you won’t be able to do what’s called a snatch to burn fat. Because this comes with a workout DVD and a fitness journal you can start using it immediately without worrying about being stuck on what exercises to do or how to do them. And by keeping a log of what you do and when you’ll be able to track your progress and stay motivated.

What People Are Saying
The PowerBell by Weider gets mixed reviews. Most people say that it is a good idea, but doesn’t quite hit the mark as far as execution goes. There are certain kettlebell exercises that you can’t perform with this, because it is not a true kettlebell. It’s not as if Weider is saying that this is a kettlebell able to do all things kettlebell with it, it’s major features are the price, and the space-saving capability, so of course you have to trade off some things.

The Weider PowerBell seems like a good idea but you have to think it through, and determine if it’s what you want. It’s basically using the same concept as the Bowflex SelectTech Dumbbells, allowing you to change between weights quickly and easily. With kettlebells it’s especially important that they not come apart in the middle of a workout, as many of the exercises involve raising it above your head, and swinging it up to the height of your shoulders. The locking system they use keeps the plates securely in place so you don’t have to worry about them coming out, hitting your head, or flying into something breakable.

Our Recommendation
If you’ve been considering getting a family of kettlebells to get a good workout in, you might want to think about getting this instead. At $200 it’s like getting a gym’s worth of weights, without taking over the area you’ve designated as your workout spot. There are plenty of different kettlebell programs you could use these with, or you can just check out free videos on YouTube that show you how to use them properly with the right form. Be prepared for a workout that might surprise you, seeing how it’s a pretty crude piece of equipment.

What do you think? Does the Weider PowerBell work or not?

← Previous Is the Shark Steam Pocket Mop Really a Good Buy?
⚅ back to blog
Next →Does the Swiffer SweeperVac Really Sweep and Vacuum?

3 Customer Reviews on “Does the Weider PowerBell Really Save Space and Money?”