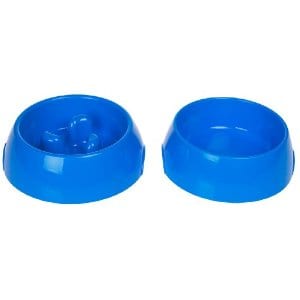 If your dog wolfs down their food faster than they should the Whoa Buddy Bowl is designed to slow them down a bit. It’s long been noted by vets that dogs eat their food too fast, which leads to many short-term problems and could lead to serious health complications. Not only that, but it’s just kind of gross to have to listen to every day, and it makes you feel guilty because you know they really shouldn’t be eating their food so fast, and you feel helpless because you don’t know how to get them to slow down. So does this bowl really provide the brakes they need, or will they just keep their current pace?

Overview
While it’s normal for a dog to get excited about mealtime, there are several different symptoms that can occur from them eating their food too quickly. Some dogs might gag or choke on their dry kibble, others might end up throwing up later, and it can lead to indigestion which causes bloating and gas, leading to discomfort for hours afterwards. There’s not much you can do, since they only get fed a few times a day, they are more than ready to eat their food when it comes time and they don’t have to worry about table manners so they just go gung ho for it.

The Claim
The Whoa Buddy Bowl claims that the three nubs inside it is all that’s required to get in your dog’s way, slowing them down enough so that they can’t just scarf it all down in one go. By making it harder to get to the food, they say your dog might be able to eat up to five times slower. The example they give in their video is for a small breed dog and the owner says that it lengthens their eating time from 30 seconds to 5 minutes. Of course that is going to be an exceptional result, as it’s one of their testimonials, but it shows that it can work in some instances.

The Hype
The hype is that this is a pet product, and people get really concerned about their pet’s well-being. By bringing up the problems of dogs eating too fast, they are referencing a problem that many owners have, and creating some alarm by talking about bloating and dogs swallowing too much air. It creates fear and worry and could push some owners to making a purchase as a way to help their dog.

The Cost
You need to order your Whoa Buddy Bowl by the size you want. A small or medium size is $10 plus $8 shipping and handling for a total of $18. If you want a large bowl it’s just five dollars more so $23. And if you need an extra large bowl for the biggest of dogs, it’s just $28 total.

The Commitment
All that’s needed on your part is to replace your current dog dish with the Whoa Buddy dish and matching water bowl. This basically cuts your commitment level down to zero, especially when you consider other methods like portioning your dogs food out, feeding them by hand, or breaking up their feeding times so that they eat less in more frequent intervals.

Evaluation
The first thing we noticed about the Whoa Buddy Bowl is that it definitely slows the dog down a bit, if you are dealing with a dog that usually eats at Mach 5, it’s not like you’re going to get them down to Mach 1. More like Mach 3 or maybe Mach 2. It’s going to trip thumb up, but not that much. It basically provides a minor inconvenience for them, and gets in the way of their snout so that they have to eat around the nubs. Dogs might not be rocket scientists, but it’s not like they’re going to be stumped on how to get to their food.

In a dog’s head this is the only meal they’re ever going to eat. They don’t know that you’re going to feed them tomorrow, and they don’t remember the meal you fed them yesterday. They’re totally in the moment, so when they see food they get in the devour mode the same way they devour life up. Some owners have even tried using a free feeding method in which food is always available to them and they dictate when and how much they eat. This tries to kill that “eat it all until it’s gone” mentality.

The Whoa Buddy Bowl bowl is a simple concept, and a simple design, and is not the only dog dish on the market with nubs on it that are designed to slow dogs down. These are known as slow feeding dishes, and there are many different kinds that use various ways to put the brakes on eating time. For example, one bowl has a solid center, forcing the dog to eat in a ring around the outer part of the bowl. Other bowls use quadrants so that your dog has to eat them separately. But the nub design is pretty popular, with some bowls having four nubs, and many bowls featuring the three nubs found here.

Our Recommendation
Be aware that some dogs just aren’t going to have any part of this, and will avoid the dish altogether. But for most breeds it’s going to slow them down, maybe not as much as they claim it to, but anything helps. Even if it doubles their feeding time, it should lessen any negative effects from eating too quickly.

What do you think? Does Whoa Buddy Bowl work or not?

← Previous Does the OneTouch Can Opener Really Work?
⚅ back to blog
Next →Does the Turbie Twist Really Work?

10 Customer Reviews on “Does the Whoa Buddy Bowl Really Work?”