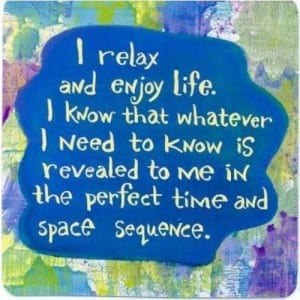 You may have heard that daily affirmations are a way to curb negative thinking, program your mind for success, or just get you to feel better overall. Some think that this was what The Secret was proposing, and that this is a way to help your mind visualize what you want so that you can get it. But does telling yourself positive things over and over really lead to a more positive life, or is this all a lot of mumbo jumbo?

Overview
The concept here is to tell yourself positive things over and over again until you believe them and they become part of your reality. Depending on who is recommending affirmations to you, you may be required to repeat them as much as possible, or at certain times during the day, or before you have to give a big speech or presentation, or just as your daily mantra. Whichever way you intend to use affirmations, you’re probably expecting them to make a positive difference in your life.

The Claim
The claim is that by repeating the same messages to yourself again and again, they eventually enter into the subconscious and you will start to believe them and act accordingly. Different sites and self-help gurus will say that affirmations are the key to all sorts of things like more money, more success, the relationship of your dreams, losing weight, and anything else people want in life.

The Commitment
You have to commit yourself to repeating the affirmations every day, multiple times per day until the message sticks. This might sound easy, but once you try it you will see that part of the problem with affirmations is that they’re hard to stick with. Even though it doesn’t involve any heavy lifting, it’s just easy to forget to do them, and they definitely won’t work if you don’t ever say them.

Evaluation
The only problem with positive affirmations is that they are basically lip service. If your mouth is saying one thing, and your brain is saying another, your brain will always win. If you don’t believe in what you’re saying, you won’t say it with the type of emotion that is required to tap into the subconcious and really absorb what you’re saying.

The major flaw of affirmations is that they are supposed to develop belief, but they got it backwards. You have to believe in them first for them to ring true in your mind.

For example: If you tell yourself “I am a winner.” again and again, but each time you do the voice in your head says things like “Well, that’s not exactly true.” or “Are you kidding? I’m a big loser, look at the car I drive!” it’s not going to get you anywhere. Maybe “I am a winner.” is too big of a leap for you to get your head around, or to get on board with. Take it down to something you can actually support yourself on, instead of being your own cheering section and away crowd at the same time.

All of the mental in-fighting affirmations create will just keep you in a hover pattern to what you want. If you want to be a winner, you might have to convince yourself that you’re not a loser first. It may not sound positive, but it’s better than whitewashing over things and just relentlessly pummeling yourself with a phony positive affirmation like “I am a winner”, or “I am successful”, when inside you don’t feel this way or believe it to be true.

If repeating a phrase over and over again led to riches, all Mark Zuckerberg would have had to do was sit in his dorm room and repeat “I am successful.” again and again. You actually have to do stuff if you want to achieve stuff, and affirmations are no magic wand.

Successful people have affirmations on auto-pilot. They don’t have to think positive thoughts over and over again, because this is their default setting. If you find that your brain is wired a little differently, and you desperately want to get to that level, you will need to find a way to switch over to the positive thinking side of things.

But this isn’t an overnight process, and will require more than just muttering new phrases to yourself. You have to start taking actions that back up your affirmations. If you want to lose weight and you say to yourself “I am fit, healthy, and attractive.” be sure to follow that up with actions that a fit, healthy, and attractive person would do. Telling yourself that while you’re vegging out on the sofa would not get you too far, and will likely end up making you feel worse.

Affirmations don’t really work on their own, but can be used in a comprehensive approach at being a more successful and positive person. Definitely use them as a starting point to try and combat the negative monologue you have going on in your head. But be careful, because if your default setting is to be negative and beat up on yourself, you’ll just find a way to fudge up the whole process and affirmations can actually make you feel lousy about yourself by pointing out things you’re currently not, and reminding you of the qualities you currently lack.

Our Recommendation
Affirmations can be helpful if you find that it’s tough being positive, but don’t think that they will magically start bringing things into your life, or that they alone will be responsible for changing your life for the better. If all it took was just repeating phrases in order to make it in life, everyone would be doing it. Start small, with positive messages you can believe in, and as you get more and more successes under your belt you can climb the ladder of positive affirmations.

What do you think? Do Affirmations work or not?

← Previous Does Grout Shield Really Work?
⚅ back to blog
Next →Does Magna RX Really Work?