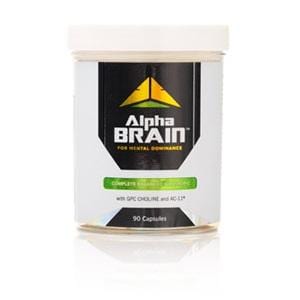 Alpha Brain is what’s known as a nootropic, a supplement that is designed to help the brain function better. They say it gives you a razor focus, increased mental drive, and can assist you in getting into a lucid dreaming state. But what about the results real people are getting from trying it?

Overview
Who wouldn’t want increased mental focus and drive, especially if it came in pill form? It’s a bit like the movie Limitless starring Bradley Cooper, although you shouldn’t expect to become a Wall Street expert and making millions of dollars just be using this. A few similar concerns do exist though, like is there the possibility to become dependent on it, and will it make you intolerable to those around you.

The Claim
Onnit, the makers of Alpha Brain, say that they have come up with a combination of ingredients that not only helps you to be more productive, more alert, and more focused in on what you’re doing, but that can also help you dream more deeply at night, and be able to control your dreams and remember them clearly. They say that their formula is scientifically proven, and uses ingredients that are making waves in the scientific community for their effects on the brain and concentration.

The Hype
Any time you have a pill that is supposed to give you increased concentration and now more vivid and lucid dreams, there’s going to be some hype to it. People are going to wonder if it will give them superhuman abilities, and if they’re missing out on awesomeness by not taking it. They also have a few pseudo-celebrities that are vouching for it, but they’ve made it clear that they may have been financially compensated for their endorsement.

The Cost
One bottle of 30 pills is $35, with $7 being the lowest shipping charge available. You can get the price down by ordering larger bottles, getting the per pill price down to 88 cents from $1.16. They’re also available at Amazon for $30 which includes free shipping, so you can actually save a bit of money and get the same product. When you start sizing up the cost against other memory boosters and brain supplements, the price seems just about average.

The Commitment
You can use these only when you feel like taking them, so they’re not a daily supplement. When you have a deadline coming up, or a test you need to ace, that’s when you’d use them, and then not take them when you’re just having a relaxing day, or it’s the weekend and you’re not required to get anything done. If you want to experience the lucid dreaming you’d have to take a separate dose as directed, several hours before going to sleep for the night.

Evaluation
Compared to using an energy drink, which has become the norm for many go-getters, these pills could represent a better option, since they don’t contain caffeine, and are therefore not trying to give you a false feeling of “energy” but rather trying to give you less brain fog and more mental drive so you can power through the task at hand. Since they’re not full of sugar you also won’t get a crash like you do with many sugary energy drinks, especially some of the most popular ones on the market.

The reviews are mixed, and that’s to be expected with something as hard to quantify as mental processes. Some have wondered whether the product is really working, or whether it’s just a placebo effect. That’s one thing that is hard to determine, since if you’re expecting positive results from these, you may find yourself being more productive just to make it a good purchase in your mind. Some have tried to replace their ADD medication with it, which is not recommended, and is not a claim that is made by the company.

It’s well-documented that our society is moving at a faster pace than it ever has. Competition for jobs has gotten out of hand, and this has trickled down to colleges becoming more competitive than ever. It makes sense to want to perform to the best of your abilities at work, and to study as effectively as you can so you can get the best grades. It plays a big part in how much money you make over your lifetime, and it’s worth checking into the different products out there that promise to help you fire on all cylinders.

Alpha Brain is getting our Solid Try rating because several users have reported that it has helped them perform better at work and school. There are also those that say they didn’t experience any differences in their sleep, or their concentration during the daytime hours, so there is the possibility that it won’t work for you. We’re convinced that the product does contain the ingredients that it claims to, and that for the right person this would be a better option that other focus and brain supplements out there.

Our Recommendation
At this price point it’s worth trying it out to see what kind of results you get. If your job relies heavily on you coming up with new ideas, new insights, meeting deadlines, writing, making plans, or if you just want to see if it will help you have more lucid dreams, we’d recommend giving it a go.

What do you think? Does Alpha Brain work or not?

← Previous Does CloudBerry Backup Really Work?
⚅ back to blog
Next →Does PC Matic Really Work?