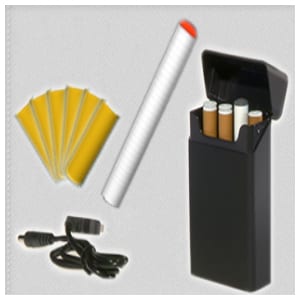 When trying to quit smoking, electronic cigarettes like AlternaCigs can sometimes be helpful. They can also get you by in a pinch even if you’re not trying to quit, but find yourself in a place where smoking is a no-no. But can these really help undo a habit years in the making, and will you really be able to smoke them in non-smoking areas? We explored further to find out.

Overview
If you’ve smoked for years, you’ve definitely become accustomed to it, and the feeling of a cigarette between your fingers might be one of the harder things to overcome. This is in addition to the addictive substance nicotine that is firmly implanted in your body, not to mention all of the other chemicals found in cigarettes that are toxic to the body and will also cause withdrawal symptoms. Doctors say the sooner you quit the better, because it gives the body more time to heal and recover, so it makes sense that these could be a sort of crutch on the way to quitting.

The Claim
The makers of AlternaCigs claim that their system is completely safe, and that it provides the same flavor and experience that smoking a regular cigarette does. They say it’s a healthy alternative to smoking. They also say you’ll be able to smoke these in non-smoking areas like at the movies, or in a restaurant, or even on an airplane and other confined spaces. They say the vapor it produces is odorless, so you won’t have any complaints from people that are typically bothered by secondhand smoke.

The Hype
Electronic cigarettes have been popular for a few years now, and have been around for over a decade. The hype comes in the form of trying to make smokers believe that these actually replicate the smoking experience with a lot of precision. Quite frankly, nothing is going to place the experience of lighting a cigarette, inhaling the smoke, and getting a nicotine fix. What you’re really going for is something that comes close enough to it to either help you kick the habit, or to smoke in places that don’t allow it.

The Cost
This is where they make a pretty strong case for AlternaCigs. It’s got an initial cost of $38 which gets you the actual electronic unit, plus 6 cartridges which is equivalent to 9 packs of cigarettes. They also offer to send you replacement cartridges with only a shipping charge. They calculate the per pack price equivalent at $1.46 and say that if you’re a pack a day smoker your annual cost would be just over $500, compared to an estimated cost of over $2500 to smoke traditional cigarettes.

The Commitment
Aside from there being a smaller financial commitment, there isn’t really any difference between smoking an actual cigarette, and an e-cigarette. In the time it takes you to take out a cigarette and light it up, you could also have your e-cigarette loaded up and ready to go. In this aspect it really helps because when you want to smoke you want to smoke now, and if you had to wait for it to charge or warm up it might be a deal breaker.

Evaluation
What’s interesting about AlternaCigs is they are really relying on your long-term use so they can continue to make money from the refill cartridges. For this reason it is in their best interest to not only provide a unit that works, but one that you’ll want to use daily and possibly even replace or put a dent in how many real cigarettes you smoke each day. With the 30 day money back guarantee, and a reasonable shipping cost, you’re not risking much on a unit that has positive feedback and a higher rate of success than most other e-cigarettes out there.

The jury is still out in regards to how safe electronic cigarettes are, since they haven’t been around long enough for long-term testing on any negative effects from using them. However when you consider all of the things that you’re not inhaling, all of the toxic chemicals that find their way into regular mass-produced brands of cigarettes, there’s little doubt that smoking the vapors from an e-cig would be the lesser of two evils.

If you’re shopping around for an electronic cigarette, AlternaCigs deserves a try. For less than the price of a carton of cigarettes you’ll end up getting the equivalent of 9 packs, so even if you just smoke through what comes with the first pack you break even. If you continue on with it the cost savings really kick in. Aside from the financial side of things this makes a great unit to give e-cigs a chance with. If you’ve already used electronic cigarettes in the past and didn’t like them, you may want to give them another go so you have something to compare them to.

Our Recommendation
If you’re trying to quit smoking and have failed in the past, you might need some supplemental products like this to help you come down from them. They say going cold turkey has the highest rate of success, but if you’ve tried that and fell off the wagon you should try some other methods to see if they are what you need. The important step when it comes to quitting is never quit quitting. Each time you make an attempt you increase the likelihood that you’ll finally get to the promised land.

What do you think? Does AlternaCigs work or not?

← Previous Does the Dead Sea Beauty Kit Really Work?
⚅ back to blog
Next →Does ClickN READ Phonics Really Work?