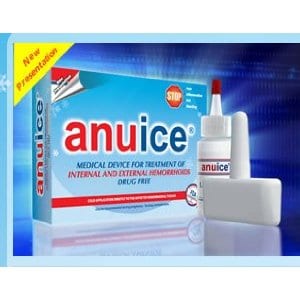 Looking like a portmanteau of anus and ice, Anuice claims to be a cryogenic device to help soothe the burning sensation of hemorrhoids. It’s pretty much in a class by itself, because it doesn’t use any drugs or even all-natural ingredients. It doesn’t use creams, lotions, pills, ointments, or sprays either. What it basically entails is a small plastic insert that you freeze and then place right inside your anus. If you’re still reading, then this might be the solution for you.

Overview
Hemorrhoids are the bane of many people’s existence, and can override the brain and be all that you think about when you’re suffering from a flare up. It’s not just the burning and itching, but the location that really drives you mad. It can also make you dread the next trip to the bathroom, and can cause your universe to center around one particular spot until you finally get relief. It’s good to keep an open mind about your treatment options, but is something like Anuice plausible?

The Claim
They say that this is a hemorrhoid cure without surgery. They say it will stop the pain, itching, burning, and bleeding commonly associated with a bad case of hemorrhoids. It looks simple enough from the outside, and the concept seems pretty basic. It’s really just a matter of providing a cold compress directly to the affected area. Since it doesn’t involve any drugs or other herbs or ingredients, there is little chance of negative side effects occurring.

The Hype
The hype it comes from the rather grassroots campaign that they are using to spread the word about their product. It still seems to be managed by a small start up company, but they have branched off into any different markets around the world, including Korea, Japan, and Mexico.

The Cost
You can buy one device for $40, two for $70 or a pack of 6 for $190. The 6 pack brings your total price per unit to about $32. The devices are reusable, but the reason they sell them in multiples is because they recommend having one in the freezer and ready to go at all times, and also so that you can give yourself back to back treatments.

The Commitment
You have to have a strong commitment to using Anuice, because it involves inserting the applicator into your rectum if you have internal hemorrhoids. This can be more than some people are willing to do, but if you’re in enough pain and discomfort, you may be willing to try anything. If you have external hemorrhoids, you won’t need as much commitment because nothing is inserted.

What People Are Saying
Real users of Anuice say that it works well, and that it does provide relief. Some have even said that it cured their hemorrhoids completely. Others have said that while it didn’t cure it, it did bring the symptoms down to a level that is bearable. A few others said they didn’t get the results they wanted, but they were in the minority, a percentage so small that it isn’t statistically significant.

One common suggestion was to use a different lubrication instead of the one they send you. Apparently the one they send is not very good, and is just included for convenience. It is recommended that you make it a point to get a different brand of lube in order to use it properly. Comfort is key here, and you want to make sure that you don’t try to force it in, or use a lube that has negative side effects that can worsen the situation.

Some users complain that for the price it isn’t really much, but the thing is that it’s a dedicated device for your anus, so there’s not really any substitute that you could use to get the same results. It’s not as if you want to use an ice pack or try to devise your own system that replicates what Anuice does. Getting a 2 pack won’t set you back too much, and it is reusable.

You can’t argue with social proof. Those that have tried it have said that Anuice works, and there’s really no reason to doubt that it does. It’s a rather simple concept, and simple concepts have a way of being effective, especially when there’s not a lot of mechanical parts involved. In this case it’s basically a plastic frozen insert for your anus, and it’s meant to apply soothing cooling relief right where you need it.

Our Recommendation
If you’ve been suffering with hemorrhoids and have tried all of the creams, ointments, pads, pills, and lotions, you should try Anuice and see if you finally get the relief you’ve been seeking. No two hemorrhoid cases are exactly the same, so you won’t know if it works for your situation until you freeze it, lube it up, and give it a go.

What do you think? Does Anuice work or not?

← Previous Does Idol Lash Really Work?
⚅ back to blog
Next →Does Mailbox Forwarding Really Work?