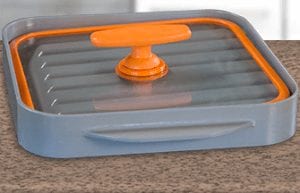 The hassle of cooking bacon is really worth it because most of us love this food. There may be an easier way to get it cooked just the way you like it but without all the trouble that goes with it.

Overview
Bacon Boss is a unit that allows you to cook your bacon either in your oven or the microwave without all the mess and hassle that comes with bacon cooking.

The Hype
Probably the hype that is most acceptable about using the Bacon Boss is that it really helps to keep the splattering of the fat down. Everyone knows that when cooking bacon in the conventional manner it can be really messy. Not to mention the small burns that can occur from the bacon spitting off the fat.

The Commitment
It is going to take less commitment to use the Bacon Boss than it is to cook your bacon the standard way. You can just pop it into the oven or microwave. You don’t have to stand at the stove tending to the bacon by turning it over every few minutes.

Evaluation
Usually when someone is cooking bacon they are cooking other breakfast items at the same time. A good hungry man’s breakfast perhaps. This means aside from the bacon there are eggs and home fries that need to be cooked. Not having to worry about the bacon because it is cooking in the oven or microwave might be a real bonus. There is also the added feature of the bacon not sitting in its own fat which may cut down on the amount of fat that you are going to consume. There are several different types of units that let you cook bacon in the microwave, but what makes the Bacon Boss different is that you have the option of using the oven or the microwave.

We’re going to give the Bacon Boss a Try/Buy. There is not enough user feed back as yet to support its credibility. Anything can look good in pictures. So although the bacon looks like it is cooked to perfection in the promo images, this doesn’t mean it is going to turn out the same for you. It is true though, that this type of unit really could cut down on the hassles of cooking bacon.

Our Recommendation
If you cook bacon a lot or are into cooking big breakfasts then you may want to consider the Bacon Boss. While the unit itself is reasonably priced, by the time you add in the shipping costs its not cheap. There are bigger and more well known units for cooking bacon as well as the other breakfast foods, but they do come with a more hefty price tag like the Cuisinart Griddler. Also the big push lately has been for people to cut down on their fat consumption. Maybe having a way to reduce the fat from your bacon is a good thing. One thing you don’t want to do is compromise the taste of the bacon because of the fat reduction. Many people complain that cooking bacon in the microwave often means it comes out rubbery and doesn’t crisp up. This is something that the Bacon Boss will have to avoid if it wants to be a success.

What do you think? Does Bacon Boss work or not?

174 Customer Reviews on “Does the Bacon Boss Really Work?”