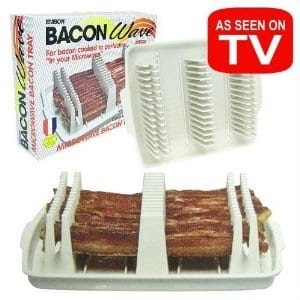 If you love bacon but don’t love making it, Bacon Wave might be for you. They say it’s supposed to contain less fat, grease, cholesterol, and calories, so what’s not to like about it? Well, the fact that it comes out of the microwave leads many people to think that it might not work. But they say it will taste like it came off of the frying pan, not out of the microwave, so we decided to give it the test and see what sort of results it provides.

Overview
Bacon is one of those foods that you just can’t help eating, even though you know you probably shouldn’t. And with all of the talk about how unhealthy microwaved foods are, combining the two just seems like a perfect storm of malnutrition. But when something tastes as good as bacon does, you have to allow yourself this guilty pleasure, or switch to things like turkey bacon to cut down on some of the fat and grease.

The Claim
The folks behind the Bacon Wave say that it cooks bacon faster, healthier, and crispier, and that it tastes great. They also claim that you won’t have to cook your bacon in a fry pan any more, because it does just as good of a job.

The Hype
It’s bacon! People love their bacon so this is going to get some attention because the thought of perfectly cooked bacon will drive many people to making the purchase to see how it works.

The Cost
You can get the Bacon Wave for under $15 at Amazon, so it’s not as if you’re going to break the bank on this one.

The Commitment
The whole point of using a microwave tray to cook your bacon is so you don’t have to put as much time into the process. Because this allows you to insert the raw bacon, pop it in the microwave and walk away, it means you’re saving plenty of time over having to babysit your bacon and avoid getting burned when the grease pops and spatters.

Evaluation
So much can go wrong when cooking bacon. It’s easy to undercook it, it’s easy to overcook it. Finding that perfect time when it’s just right can be tricky. With the Bacon Wave you don’t have to worry about getting it right. It cooks it crispy, but not too crispy, and it leaves enough moisture in it so you feel like you are eating a piece of bacon from your favorite breakfast restaurant.

Skewering the bacon is pretty much why this works so well. It stretches the bacon out so that it gets cooked easily and doesn’t shrivel up as it gets hot. It also keeps it up off the grease, which is why it comes out so good. The cooking guide of one minute per slice of bacon means that you don’t have to worry so much about getting the cooking time right, although you’ll want to make adjustments based on how well you know your microwave, and whether this sounds right to you. Also, trial and error will let you know what is the right time for your set up.

Clean Up is a Snap
We like that it’s easy to clean, you just run it under the water to get the grease off, soap it up and wipe it off and you’re all set. Compared to cooking it in a fry pan or a skillet where it leaves big puddles of grease everywhere and you have to wait for the pan to cool off before you can clean it. By that time the grease has hardened, making it even harder to get off without scraping the pan.

The Safer Way to Go
One big thing here that the makers of Bacon Wave don’t tell you is that this is really the safer way to go as far as not getting splattered by hot bacon grease, and not risking a chance at starting a grease fire. With their unit you don’t have to get in harm’s way, and the worst you can do to yourself is burn your fingers on a piping hot piece of yummy bacon.

The Bacon Wave does what it says it will do, and is often imitated and rarely duplicated. It gets good reviews in addition to ours, and several real world tests confirm that this is one of those Seen on TV products that knocks it out of the park. The bacon comes out uniform, looking good, and tasting good. It has a deep tray so it collects all of the grease and keeps your bacon out of it. The skewers make it easy to handle your bacon so you don’t have to get near the grease and potentially burn yourself. FYI: Be sure to wash the skewers by hand and do not put them in the dishwasher.

Our Recommendation
We’re recommending you pick up the Bacon Wave, and you can even grab two if you have a big family to feed because they stack on top of each other and can be used at the same time because of their low profile. Breakfast time will never be the same now that you can make delicious bacon at home with hardly a mess made, and with easy clean up.

What do you think? Does Bacon Wave work or not?

← Previous Does the OPI Foot File Really Work?
⚅ back to blog
Next →Does the Krups Egg Cooker Really Work?