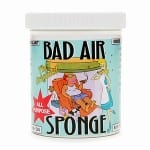 Getting that funky smell out of your house can be a real task, but Bad Air Sponge aims to make it as easy as can be. There’s nothing worse than an odor that won’t go away. Even if you keep things nice and clean there are still some smells that seem to linger on long after the source as been removed. If there were only a product that could knock out these smells for you as they occur. Is Bad Air Sponge that miracle product?

Overview
There are several products on the market for odor elimination. It’s big business. There are many different smells out there that people can’t tolerate, and having trouble keeping control of. Some of the most popular unpleasant smells are the ones left over from cooking, the ones around the trash can, and pet odors. It can be frustrating to try and combat these odors, but they still stay on.

Products like Glade try to cover up the smell, and Febreeze is the most mainstream product that is designed to eliminate the odors found in clothes as well as the air. Bad Air Sponge takes the same approach at attempting to eliminate the odor, rather than just covering it up.

The Claim
All you have to do is open the container and let it go to work. This is part of the draw to Bad Air Sponge because you don’t really have to do anything. Unlike an air freshener that you have to manually spray each time there’s a smell you don’t care for, with this you just open it up and it should keep up with odors as they occur.

The Cost
Bad Air Sponge is relatively inexpensive when you consider its effectiveness. You can pick it up for less than $12 and depending on how bad your odor problem is, it will last anywhere from a week to several months. You can even use it up to the very last bit by placing the near empty piece into your vacuum cleaner bag, or your trash can, taking the odor out of these places.

The Commitment
You don’t have to do much with the Bad Air Sponge. It’s really a set and forget type of product. If you find that it’s not working as well as you thought it would you should follow the steps it suggests for stronger odors. It will run out and need to be replaced at some point, but that’s easy enough, and the price is at a point where it doesn’t cost an arm and a leg to keep using it.

More claims made in their promo video:

Evaluation
Most people that have tried Bad Air Sponge are believers. The ones that didn’t like it probably haven’t used it according to the instructions. There are ways you can make it even more effective than it is. You can take the entire unit out of the tub and place it on its lid. This is recommended if you have a really strong odor that is overpowering your place.

You can also put it in front of a window, the breeze will flow through it and allow a mix of fresh air and allow Bad Air Sponge to permeate throughout a larger area.

Bad Air Sponge is very effective at eliminating odors that occur in common places, like the kitchen and bathroom. If you have pets it’s good at neutralizing pet odors, and if you have tried other odor eliminators without success you might find that this is the one product that finally works for you.

With so many choices of products that allow you to freshen up the smell of your home, it’s hard to decide which one to go with. It’s always best to eliminate things rather than cover them up, so the approach taken by Bad Air Sponge is a solid one.

Our Recommendation
Grab yourself a Bad Air Sponge. With its low cost and fantastic user feedback, chances are it’ll solve your various odor problems and return things back to normal. If you find that it isn’t working the way you thought it would, make sure to follow the directions that are included for stronger odors and you should see some improvement.

What do you think? Does Bad Air Sponge work or not?

← Previous Does SparkPeople Really Work?
⚅ back to blog
Next →Does Income Hybrid Really Work?