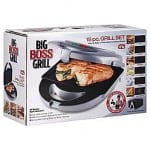 The concept for Big Boss Grill isn’t anything really new. Sandwich makers have been around for decades, and everyone on the planet either has a George Foreman Grill, or knows about it. But from the ads it looks like it would be handy to have, and fun to make all sorts of things for lunch and dinner. But does it work the way it seems it does?

Overview
The basic concept is the same as a Foreman Grill, with two heated plates that cook both sides at the same time. The Big Boss Grill doesn’t have a slant to it, so it’s not claiming to let all of the fat flow out of it. Gadgets like these seem to speak to the soul. Everyone dreams of using something like this all the time and have lots of yummy food, made quick and easy at home.

The Claim
The claim is that you can avoid buying a bunch of different appliances and gadgets for the kitchen by buying a Big Boss Grill. Also, because it is double sided it can cook your food more quickly, and because nothing sticks to it, it is easy to clean and you won’t be scraping food off of it trying to get it out.

The Hype
The hype comes from stating all of the different things you won’t need to buy if you get a Big Boss Grill, and how much cost savings you’ll experience. Most people probably already have some of these things in the kitchen, so it’s not as if they are just about to go and buy a dozen kitchen gadgets. There’s not really any cost savings going on, other than inside the consumer’s head, if the ad is successful.

The other part of the hype comes from trying to convince people that they actually will make dozens of different foods, and they’ll be eating lots of new things. Most people probably just want it for one or two particular uses, and will just be using it for that.

One of the most aggravating things that these sales pages do is not tell you how much shipping and handling is. They actually expect the buyer to enter their credit card information onto their site, and click the Buy Now button, without showing them a total price.

We’re assuming that the shipping is $9.95 because that’s how much they are charging to ship the “free” Big Boss Chopper, if you choose to add that to your order. If this is accurate it would make the total cost of the Big Boss Grill $50.

The Commitment
You’ll have to buy the ingredients that go into the foods made by the Big Boss Grill. If you don’t make a lot of food for yourself at home, this may be something that you’re not used to. It could entail a rather lengthy shopping list if you keep a bachelor-style kitchen and refrigerator.

However, if you’re already making a lot of meals at home, and making donut batter seems like a really easy task, then the Big Boss Grill will most likely dovetail nicely into your normal routine, making things more fun and easy in the kitchen, and producing yummy results.

Evaluation
For $50 you really get a nice little unit with all of the mentioned attachments. The different plates are easy to take off and put back on, and it works like it shows for most items. One thing to note is that there’s not really an on/off switch, you just plug it in and unplug it to turn it off. This seems just a tad primitive and it would be nice if they could add a switch to it.

Another area of concern is that the non-stick coating on the plates is rather delicate, and can scratch easily. It’s dishwasher safe, but it might be best to hand wash the plates and dry them separately so they don’t clank together in the dish rack.

The Big Boss Grill successfully passed many of the tests presented to it. It cooks a mean burger, makes good-looking stuff sandwiches, has no problem cooking chicken breasts and veggies at the same time, makes cute little donuts, and makes omelets a lot easier than the traditional way.

One thing it seems to have trouble with it the waffles, which is unfortunate. In the commercial they show perfect Belgian style waffles that look absolutely scrumptious. We couldn’t replicate them, but perhaps you will be able to perfect the process with enough trial and error.

Our Recommendation
Pick up a Big Boss Grill. It’s fun to have around, and lets you cook a lot of different foods at home, without having to go to a restaurant or cafe.

What do you think? Does Big Boss Grill really work?