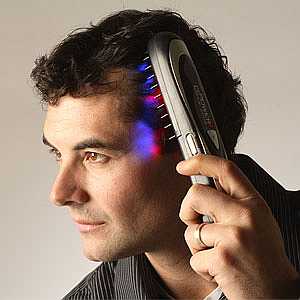 When you’re losing your hair, you’ll try just about anything, and that’s the kind of mentality you have to have when you first see a laser comb in action. It looks pretty futuristic, and it takes a leap of faith to imagine that it is actually stimulating your hair follicles. But when you are desperate and you have tried a lot of different solutions promising results, only to be disappointed time and time again, it starts to look pretty believable. We checked it out in-depth to let you know the real story.

Overview
A laser comb looks like a big comb that you plug into the wall, or is cordless. When you use it, it gives a red glow over the area that it is “working” on. The general thought is that it is emitting a low level laser light to your scalp, which is encouraging your hair follicles to start growing again. Anytime people bring up lasers it gives a sort of campy, 1984 or Back to the Future feel to it, where we should be floating around in jet packs, and riding around in our flying cars. Many of the companies that produce laser combs say that this is the same kind of treatment you can get from a professional.

The Claim
The makers of laser combs claim that this is a cutting edge treatment that you can do at home, so you don’t have to keep making visits to a clinic to have it done. They also say that it is safe, and effective, and uses some newly approved laser treatment, or that it is something that has been used in Europe for years now with great success. Basically, they will do and say anything to get you to subscribe to the idea that you can use this comb to treat your thinning or balding hair from the privacy and comfort of your home.

The Hype
Every single hair loss product on the market has some hype behind it, but when it comes to a laser comb there is that additional hoopla because it involves lasers. It is hard not to conjure up the image of Dr. Evil saying that he wanted to have sharks with laser beams on their foreheads. There’s something about lasers that makes it seem a little far fetched and makes it so you just have to believe in it, and give it a try so that you aren’t left wondering if it would’ve worked or not.

The Cost
Laser combs can vary from being incredibly expensive to suspiciously cheap. Of course this is not something that you want to bargain shop for, since it is supposed to be using a technology like lasers. You don’t want something that was just created in a hurry so that they could bring it to market and sell it to unsuspecting hair loss sufferers. You want to go with a laser comb that was created by a company that puts research and development behind it so that there’s a higher chance of it working.

The Commitment
One of the reasons someone would be drawn to using a product like this is because it isn’t messy, and doesn’t take a lot of time to use. When you compare this to using something like Rogaine, or another product that requires you to apply it directly to your balding areas, it definitely comes out on top. Also, when you compare it to taking a pill it is preferable because it doesn’t involve putting potentially unknown herbs in high concentrations or pharmaceutical chemicals into your body.

Evaluation
There are several different laser combs on the market these days, and most of them have mixed reviews to them. Now, before you go judging them just because they don’t have overwhelmingly positive feedback, it’s important to remember that all hair loss products are going to have people that say it doesn’t work. The basic fact is that it’s not going to work for everyone. Unfortunately, these products do come with somewhat of a high price tag, so it’s something that you might want to have more assurance that it works before you buy it, but you probably aren’t going to get it.

With so many different all natural and herbal remedies for hair loss out there, it doesn’t really make a ton of sense to use something like a laser comb until you’ve tried a good number of them. This would be sort of a last resort, last-ditch effort to try to salvage your hair. We say this only because it is a rather large investment to make on something that could potentially do nothing for your hair. If you haven’t exhausted all of your lower cost options that show strong signs of working, you don’t want to just jump right into a big purchase like this.

Our Recommendation
When it comes to losing your hair you only have a few options: Shave your head and get the Jason Statham look, and just own the fact that you’re a bald guy, or fight it tooth and nail by trying every single product out there that is designed to stop the loss from happening, and potentially start some regrowth. However, you have to be a realist and know that a lot of the products out there flat out don’t work. Keep a healthy mix of optimism and skepticism and remain hopeful during your quest. You never know what will work, so don’t rule anything out without trying it.

What do you think? Does a Laser Comb work or not?

← Previous Does Secrets to Dog Training Really Work?
⚅ back to blog
Next →Does Clearasil Really Work?

48 Customer Reviews on “Does a Laser Comb Really Work?”