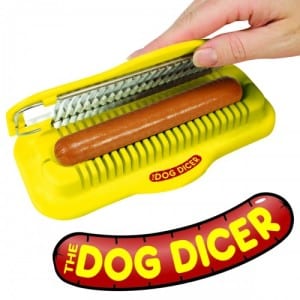 If you’ve ever wanted to cut a hotdog in one motion the Dog Dicer might be the product for you. It’s similar to an egg slicer but it is specifically made for hot dogs. But does it really work as shown?

Overview
Children that are toddler aged and moving from baby foods and into solid foods are at risk for more potential to choke. This is because they’re giving bite sized food but still learning what it means to chew the food up until it’s able to be properly swallowed.

The Claim
The makers of the Dog Dicer say that in just one chop you’ll render a dog into several different pieces, none of which will be big enough to choke on, and will be ready to serve to your little one. They also say that you can slice up soft foods like bananas, grapes, or strawberries. Anything harder than than these types of foods is going to get stuck between the blades or is going to be too hard for the blades to cut through.

The Hype
The hype here comes in the form of scare tactics being used to try to sell the product. While it’s true that hot dogs can represent a choking hazard, they make it appear as if there are headlines every day featuring a choking child. They even go so far as to show a child acting as if she’s choking on a hot dog in order to drive the point home. This sort of advertising shouldn’t be allowed, especially when it shows children pretending as if their lives are in danger.

The Cost
The Dog Dicer is $18 with standard shipping included. They have it set up so that if you want additional units you pay $5 for their shipping but you aren’t required to buy two, you have the option to just buy one.

The Commitment
This should reduce the amount of time you spend getting a hotdog ready to serve, but how much time it saves you is up for debate. It could end up costing you more time just having to get it out to use it. If you’ve already got a knife at the ready, you could have the hot dog cut by the time you get this gadget out and ready to go. They show a woman cutting her finger while cutting hot dogs, but they’re one of the easiest things to slice, so this is a bit of an exaggeration.

Evaluation
The Dog Dicer is pretty unremarkable in what it actually does and the problem it attempts to solve. It might save you few seconds from cutting a hot dog a few more times, but really, it’s not enough of a task to merit buying a product made almost exclusively for this purpose. They show that it can cut other things, like grapes, strawberries, and bananas, but these foods are also easy to cut with a basic knife, and the time and effort savings would be minimal.

Overall this is one invention that didn’t really need to find its way to the market, and might have been best served staying in the idea phase. Their major pitch is the time savings for busy parents, but when you consider that it’s relatively easy and not very time consuming at all to make one extra slice down a hot dog to prevent circular shaped hot dog pieces, it’s not really much of a product at all. They may lull a few parents into making a purchase due to the scare tactics used in the infomercial, but it likely will not get used very often, unless you feed your child a daily hot dog and find that this saves you more than a few seconds in slicing time.

Overall, the Dog Dicer definitely works to cut hot dogs into have circles, but so does a knife, and in roughly the same amount of time. Just cut the hot dog lengthwise, and then cut it into pieces like you normally would. The same thing goes with grapes and bananas, you’re simply trying to avoid giving your child pieces of food that are in the shape of a circle and the size of their airway. If you’re a kitchen gadget nut that likes to have lots of different items for each different food you prepare, this might be a good buy for you.

Our Recommendation
This is one less kitchen gadget you’ll need to make room for, and it doesn’t really serve much of a purpose in most homes that have a cutlery set. If you take an extra second or so to make a cut down the length of the hot dog you’ll avoid giving your child pieces that might lead them to choke. You can also teach your child to chew their food well to further prevent a choking hazard.

What do you think? Does Dog Dicer work or not?

← Previous Does Octaslider Really Work?
⚅ back to blog
Next →Does Tour Academy PGA Really Work?

7 Customer Reviews on “Does the Dog Dicer Really Work?”