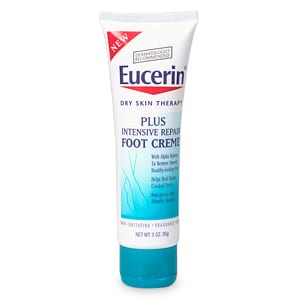 If you haven’t tried Eucerin Foot Cream before you might be wondering if it’s as good as their hand cream. Eucerin made a name for itself by creating pretty effective creams that not only moisturizes but keeps your skin soft and supple for hours. They are trying to replicate the same sort of success with the feet, and hoping that their reputation trickles over to this new product. So let’s see how it weighs up against the competition.

Overview
If you’re trying to get baby soft feet without going to a salon, you are going to have to find a foot cream that not only moisturize your feet, but also helps prevent them from developing rough spots, and hard calluses. A lot of moisturizers out there need to be reapplied every few hours as their effects wear off. Others leave your feet feeling all oily and greasy, and can be hard to apply because your feet just won’t absorb it.

The Claim
Eucerin Foot Cream says that it has been clinically proven to turn your dry feet around, and bring them back to their soft ways once again. They also say that it will protect your skin by locking in its natural moisture, and that the effects will be long-lasting so you won’t have to reapply as much. They also say that the formula they use is non-greasy, and you won’t have to keep rubbing it in because it absorbs quickly. One feature that we like is that it is odorless, so you don’t walk around smelling like you just used a moisturizing cream.

The Hype
The hype comes from the Eucerin brand name already having a successful track record with their hand cream and other moisturizing products. Sometimes a company can spread itself too thin by trying to increase its product line, but in this case they are hitting the nail on the head with each of their different products. They’ve got hand creams, body lotions, face creams, they’ve pretty much got all areas covered. Not only that but people seem to really love the different products, so they must really be on to something here.

The Costlong into the next day.
You can get a 3 pack of Eucerin Foot Cream for a little over $16 at Amazon, so you’re looking at a little over five dollars per tube, which isn’t so bad.

The Commitment
Your feet definitely require your attention from time to time and the best way to care for them is to give them a little daily attention. Add them to your skin care routine and you will see that it’s much easier to maintain a pair of healthy feet than it is to try to correct problems. If you apply a little bit of Eucerin cream on them before you go to bed each night, you will not have to worry about a dry foot problem anymore.

Evaluation
Eucerin Foot Cream has been living up to expectations, and thrilling those who have used it. It has very few detractors, with most people saying it not only works quickly, but the results last long into the next day. It is rare that a skincare product gets such lopsided reviews. With all the varying skin types and conditions out there it’s hard to create a crowd pleaser. That’s just what they’ve done here, and there is a very high chance that this foot cream will be the one you end up using long-term.

How Does Eucerin Do It?
There are so many moisturizing lotions on the market that fall short of being effective, it’s interesting that one company seems to be getting it right so much. So what is their secret, and what do they do that is different than all the other companies out there with mixed reviews? It seems that one key to their success is breaking skin care down into the different ways you can treat it. They have products that repair, maintain, and calm your skin down, depending on what it needs. Instead of trying to create one general product that handles all problems, they’ve split it up so that it can be more targeted, and hence, more effective.

Eucerin Foot Cream is definitely a winner, and should be given a try. There are also some pretty good competitors, and since you’ll eventually run out of whatever foot cream you go with, it only makes sense to try out the best of the best and see which one you like the most. If you stick with one foot cream before trying out all the others, that’s like going to only one restaurant in New York and thinking that you’ve tried all of the food that the city has to offer. You should sample at least three or four different well reviewed foot creams before being loyal to your favorite.

Our Recommendation
The other foot creams we recommend in addition to Eucerin is HeelTastic and Miracle Foot Repair Cream. HeelTastic is great because you see results the same day, and can turn around even the driest feet with the most cracks. The Miracle brand also performs well, and is similar to Eucerin as far as keeping your feet looking and feeling great for a longer time. Your feet are definitely going to thank you for giving them so much attention, and you’ll be able to showcase your tootsies in open toed footwear once again.

What do you think? Does Eucerin Foot Cream work or not?

← Previous Does the Diamancel Foot File Really Work?
⚅ back to blog
Next →Does the HAAN Steam Mop Really Work?