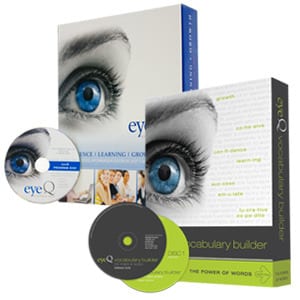 EyeQ Advantage is a system that is supposed to help you increase your reading speed, manage information overload, and skim through documents pulling out the necessary information without investing yourself fully. This would help out in today’s society where we’re inundated with information, and can be applied to everything from an improved performance at work or school, to a better quality of life. But how well does it really work when put to the test?

Overview
More than any other time in history we’ve got a lot of information to process. The Internet has as much information as you could ever hope to learn, from casual browsing of various topics on Wikipedia to entire courses in human history and the most detailed scientific reports. And that doesn’t count all of the blogs and other newsworthy tidbits of information, as well as quality authors putting out new books all of the time, all beckoning our brains to read them. It can be overwhelming, and many of us just throw our hands up and resort to TV or aggregation services.

The Claim
EyeQ claims that their program can train your brain in just seven minutes, and that studies at Brigham Young University have shown it to be effective. They say you can double your reading speed, and that this is the best selling brain training program in America. Some pretty bold claims, and ones that you could easily test out, and they even encourage you to clock your reading speed before starting out.

The Hype
Brain training is all the rage these days, from online sites promising increased smarts, to video games getting into the mix. Whether it’s the baby boomers trying to stave off dementia or younger generations recognizing the importance of keeping the brain sharp it’s good to see so many people trying to stay alert and sharp. With emerging evidence showing the brain can be taught new things at all stages in life it’s only natural that anyone with a brain would want to make it the best it can be.

The Cost
The EyeQ system is tailored depending on how you want to use it. The Personal edition is $200, while the Business and Education editions involve getting a quote based on the number of employees or the number of students. For the Business edition they have an ROI calculator, which makes it seem like they are pretty confident that their system could improve the bottom line of a business and make the employees work smarter. As a personal cost, $200 may seem like a lot to invest in a brain training program, but if it lives up to its claims it would pay for itself many times over.

The Commitment
Just like you’d have to commit to the long term if you wanted to exercise your body, the same holds true for your brain. And just like the muscles of your body the results are cumulative and build on themselves. That’s why you can’t expect to go from scrawny to brawny in a short time, and why you shouldn’t expect the same from your brain. Take a longer view of your brain and know that you’re going to be able to reap the benefits for both the short and long term.

Evaluation
Studies at universities are one thing, but a lot can be said about social feedback, and these days it’s getting pretty easy to find out what actual users are saying about how well something works. In the case of EyeQ, it seems that most people are saying it didn’t work for them. This could be due to a number of factors, including the inability for most people to accurately determine if it’s working, as well as a wide variation of how often users are using the program, and if they’re following the directions.

There are a good number of people that said it did work for them, but that it does require time put into it, which would explain why other would say it doesn’t work. Sometimes when a product claims to work quickly the expectation is that not much time will need to be put in, or you won’t have to stick with it for the long term. Improving the brain is going to require short bursts of training done on day to day basis, something that many people would struggle to incorporate into their daily routine, especially during the first few weeks when results might not be visible.

EyeQ is getting the Thumbs Up rating from us due to the existence of positive reviews, the case studies that are presented showing that it works during controlled experimentation, and the fact that you can track your progress by testing your reading speed both before and after you start the program. There’s also a way to take it for a demo for yourself before you commit to buying it. That way you can get a feel of whether or not it’s something you can see yourself doing for at least two weeks, more preferably for a month.

Our Recommendation
There’s no magic bullet when it comes to training your brain and improving its skills. After many years of going untrained there’s a lot of mental lethargy to get through before real progress can be seen, but inertia is the hardest thing to overcome. If you can make it a point to stick with this program for the long term you will be able to get through that period of time where it seems like nothing is happening. But just like Daniel-san was shown by Mr. Miyagi that his training had paid off even though he was just paining fences, you’ll see that your efforts were not in vain.

What do you think? Does EyeQ work or not?

← Previous Do Victory E-Cigs Really Work?
⚅ back to blog
Next →Does FertilAid Really Work?