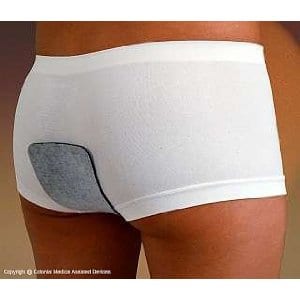 Flat-D is a line of odor control products that are specifically designed for flatulence, aka fart gas, as well as other embarrassing odors. It might not be the most seamless way to go about it, but it’s still discreet and if it works would allow you to pass gas without having it traced back to you.

Overview
Gas can often creep up at the most inopportune times, and if you’ve got a condition that is making it worse it can be all you can do to hold it in or stifle the smell. There is something to be said for being considerate enough to want to think about other’s well-being, but really it’s just about avoiding an embarrassing moment, or perhaps you’re tired of the odors as well.

The Claim
Flat-D claims that their specially designed pads use charcoal to help filter out the odor and make it so you can release the gas without worrying about the smell.

The Concept
Many people have been searching to see if these actually work, and it seems that it’s a pretty common problem with a solution that looks a little odd at first glance. But charcoal-based products have long been known for the odor-controlling properties, so it’s not a big stretch of the imagination to see that they’ve figured out how to put this into a thin strip that can be attached to undergarments.

The Cost
It’s $14 for a reusable pad that they say is a good starter product. They also offer disposable pads that are $3 each and come in packs of 10. They also have chair pads and products for feminine odor ranging from $15 to $30.

The Commitment
The pads come with self-adhesive strips so that you can adhere them to your underpants, positioned so that it will be covering the source of the fumes. Some users say that it doesn’t stick very well and moves around during the day, but most say that if you follow the directions to the letter it stays put and doesn’t need a lot of adjustment once you’ve got it in place.

Evaluation
The only problem with a product like Flat-D is that it’s treating a symptom and not the cause. Rather than doctoring up your underwear you could take measures to avoid getting gas in the first place. Flatulence that is in great quantities or smells so foul that you are considering wearing this are signs that your body is not properly digesting the food you’re eating. This could be due to a medical condition, an overloaded colon, or a sensitivity to certain foods.

One drawback is that you’ll need to wear tight fitting underwear to get the most benefit from these, so most boxers don’t make the cut. Boxer briefs would also work, but regular briefs seems to be the best bet. This can take some getting used to if you’re accustomed to the freedom that boxers provide, but it’s all about choosing your priorities, and if you’re serious about cutting down on the odors it’s not too much of a sacrifice.

Putting an odor control pad between the source of the gas and the surrounding air is a fix that seems to hold up to real world scrutiny. There are different types of product that Flat-D offers, and some work better than others. The washable and reusable version gets better reviews than the disposable variety, plus has the added benefit of getting more for your money since you can use it again. At some point Hanes or Fruit of the Loom will figure out how to infuse their fabric with charcoal, but until then this seems to be the best thing going.

Our Recommendation
If you’ve come to view your gas as something that is natural and that you just have to deal with, you might want to consider taking steps to try and lessen it. This could involve avoiding foods that you know give you gas, taking something like Bean-o before eating offending foods, getting a colonic or conducting a colon cleanse to help rid yourself of toxins that may be to blame for the excessive and bad smelling gas. If you’re suffering from an intestinal issue that causes severe gas, then this could serve as a way to keep the air a little better smelling at a reasonable price.

What do you think? Does Flat-D work or not?