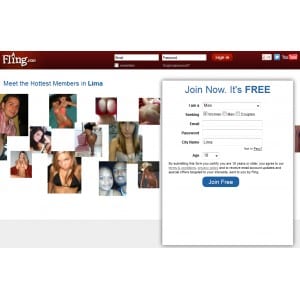 Fling (fling.com) bills itself as the world’s best adult adult personals, but they’ve got to prove that they’re better than competing sites such as Ashley Madison, and Adult Friend Finder. The rise in popularity of these types of websites says something about the state of society’s view of traditional relationships, but can a site like this really work?

Overview
It’s only fitting that adult-themed sites like these exist because there’s a large gap between a long-term relationship like the users of eHarmony are looking for, and the no-strings-attached hook-ups that sites like these purport to facilitate. The other thing that needs to be in place is a large user base. There needs to be enough users of both genders each looking for what they’re interested in for it to work. That’s why the big sites have so much success, there’s a large number of people using them due to the national ad campaigns in place.

The Claim
Fling claims that you can use their site to find other like-minded adults that don’t want a serious relationship, and just want to have a fun or light-hearted sexual encounter. They even go so far as to guarantee it, which we explore further down below. The big draw is that everyone that signs up, if their being honest about what they want, is looking for the same thing. If you really do want just the physical without all of the romance, or just the passion without all of the commitment, this should be the environment to find it.

The Hype
The hype is that a large majority of people will sign up in the hopes of getting an easy hook-up, but in reality they may never actually go through with it, or there might not be anyone there that interests them or is close enough to have something happen in real life. What they’re selling here is the idea of getting sex with minimal investment in time and effort, and that will cause people to want to sign up just to see if it might work.

The Cost
Signing up for basic membership is free, but just like with all of the social networking sites out there, the site builds value by getting members to sign up. They also have it set up so that you can upgrade your membership to unlock additional features. For example, their next level up is $25 a month if you pay monthly, and the one up from that is $35 a month if you pay monthly. They have discounts if you buy multiple months at one time.

The Guarantee
They have what they’ve termed the Get Laid Guarantee, and they say that you will have sex using their service or you don’t have to pay for your membership. It’s not a money-back guarantee, but a way of doubling your initial membership fees if things don’t work out for you. If you stay on for three months in a row and don’t manage to line up a sexual encounter during this time, they’ll comp you an additional three months to give you better odds. All they require is that you have a picture of yourself on your profile, and that you send out or respond to 5 messages a week.

Evaluation
Fling makes a pretty strong case for itself, and they seem pretty confident that the average person would be able to find a sex partner and be happy enough to stay on with a monthly membership in order to keep their love life going strong. After signing up for it, we were impressed with the seemingly large number of options that were available in our area. After reviewing several dating sites this one seemed to be on par with some of the big boys, and most of the users seemed genuine, and not that they were just stringing you along.

The free membership provides enough features so that you can get a good enough feel for it to see if you want to put down some money and give it a full trial. When you consider the price of drinks at a bar, or dinners at a restaurant to do the traditional pick up or dating scenes, it only makes sense to put some money down to possibly circumvent all of that.

Fling.com is getting our Solid Try rating. It’s been shown to work for some, but not so much for others. What’s interesting to note is that the people it does work for don’t really have a pressing reason to come out and tell people about it. But those that didn’t have luck with it are more likely to voice their dissatisfaction. Of course it’s going to depend a lot on the individual but at least you’re barking up the right tree and are at a site where people aren’t looking to get married or be boyfriend or girlfriend.

Our Recommendation
Even though their the first site we’ve seen that guarantees you’ll get laid, they also stipulate that you’re going to have to show that you’re putting forth a modest effort. If you’re waiting for something to fall in your lap you might be waiting a long time. If the desire is strong enough you’ll find a way to make it happen, and this site could be a way to streamline the process, but you’ll still have to be involved and make a convincing argument as to why you should be the one they sleep with rather than someone else.

What do you think? Does Fling work or not?