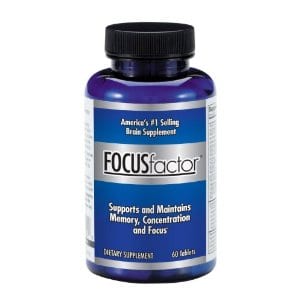 FOCUSfactor presents a pretty irresistible premise: the ability to think more clearly and effectively and get rid of the dreaded “brain fog” that can put a dent in your productivity. This would appeal to students and those that rely on sharp thinking at their jobs, or anyone that wants to get the most out of their brain. But can an all-natural pill like this really be used to boost the brain’s abilities?

Overview
We all want our brains to work at optimal levels but it seems that in this post modern world it’s getting harder and harder to function. With all of the entertainment options available, and LCD screens seemingly everywhere trying to draw our focus out of the moment it’s often not easy to stay on task and feel like you’re on top of your game mentally.

Add to that all of the fast food and junk food options that can induce a food coma, and all of the other vices and distractions that can get in the way and it seems the deck is stacked against mental fortitude.

The Claim
The makers of FOCUSfactor claim that it is a proprietary mix of vitamins and minerals that contains antioxidants and things like omega-3’s that are supposed to help support your concentration, focus, and memory. They point to ingredients like B vitamins, plant extracts, and beta carotene, but also highlight that their product doesn’t contain stimulants like caffeine and sweeteners, preservatives and fillers, or gluten and other foods that some people are sensitive to. They don’t claim that it makes you smarter, or boosts your IQ or anything like that.

The Hype
The ads on TV gave this the initial hype that it needed, and they used to say you could get a free supply for a trial run. Since this is dealing with a product that has a wide audience and solves a problem that many people can identify with, it got its share of attention. These days the initial hype has died down, but the product still continues get a lot of people asking whether or not it works, and if it can really improve mental function.

The Cost
When FOCUSfactor first came out it was priced at about $80 for a one month supply. Now it can be found for around $30 at various online supplement shops. The fact that the price has come down considerably since its earlier days is a tad suspicious, but perhaps they were price-testing what people were willing to spend it seems that they found the price that the market would bear.

The Commitment
Taking a pill to solve a problem represents the smallest bit of commitment imaginable, and is often a major reason why they get a lot of sales. As humans we like the idea of handing our problems over to a capsule and if it sounds like it is feasible we’ll at least consider it.

Evaluation
Consumer Reports called Focus Factor fiction when they evaluated the ingredients and asked for some evidence of research to prove the claims. However they also say you can get these ingredients for $1 a month and we wouldn’t recommend using something that low-grade. But it is peculiar that they wouldn’t provide the requested research and prove that their product works, as that would have likely increased sales and led to a more positive review.

It’s hard to argue with the case that is made, seeing how the all natural ingredients listed have not been proven to help improve memory or concentration, so why would they magically start to do that when combined together? Also, the only sort of “proof” that they provide is a self-funded clinical study that showed positive results from participants. That’s not very assuring, and the sort of clinical research you really want to see on a product like this is done by a third-party and not sponsored by the company that manufactures the product in question.

In all likelihood FOCUSfactor does not provide the sort of results they claim it does, and the good feelings users are experiencing are from the vitamins they’re taking and the placebo effect of using an expensive product. While it might provide some sort of effect to those that don’t already take a multivitamin or supplements, for most there are better options available at a lower cost or at no charge at all.

Our Recommendation
It’s possible to improve your brain’s power, ability to focus, and to think clearly if you make healthy and positive changes in your lifestyle. A lot of the fog that people describe having comes from things like overeating, not getting enough exercise, drinking caffeinated drinks, drinking alcohol, not getting enough sleep, and not drinking enough water throughout the day. Try making those changes first and see if you still feel the need to take a brain-boosting pill.

What do you think? Does FOCUSfactor work or not?

← Previous Does Firma-Face XR Really Work?
⚅ back to blog
Next →Does Tat B Gone Really Work?