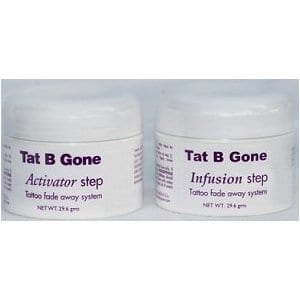 The Tat B Gone says that it gradually fades tattoos away until they’re no longer visible. This would be great if you’re now regretting getting your tattoo either for a new job, or because you just don’t like the design any more. But can you really use this two-part system to get rid of the ink you no longer want?

Overview
Tattoos are designed to be permanent, but that doesn’t mean you’re always going to like what you’ve got. This is especially true if your tattoo is in a location that has received a lot of sun over the years and is faded, or is in a spot that is sagging due to aging and it’s distorted and doesn’t look the way it used to. If they find a reliable way to get tattoos removed without the pain and expense of laser removal they’d likely become far less cool since they’d pretty much be temporary.

The Claim
Tat B Gone says that it is the simplest and most effective and affordable tattoo removal system on the market. By using it they say you won’t have to visit a dermatologist’s office, and you won’t have to heal from the any painful procedures. They say there’s no risk of scarring, and that you won’t be left with any residual marks. It involves using a preparation treatment to get the skin ready for the next step, what they refer to as the activation step which is designed to break up the ink so it can be absorbed by the body.

The Hype
Tattoo removal systems are increasing in popularity as more people want to get rid of tattoos that they got at a young age. It seems that technology should have improved to the point where tattoos could be removed more easily than they can, which is perhaps the reason why so many people try at-home kits like this one. But the reason they last so long is because the ink is inserted below the top layer of skin and it’s insoluble, so it’s simply not meant to go without a fight.

The Cost
Tat B Gone is $65 to try out for a month with discounts in place if you order multiple months at a time. For example if you’ve got a big or dark tattoo you can get 10 months for $475, effectively bringing the price down to $46 a month. They make the case that this is an inexpensive treatment, and if you compare it to laser removal they’re right, but only if it works. Since it is supposed to be used for a long time as your tattoo slowly fades the price for this can get up there as well, so it’s always best to look at all of your options and get a reliable quote from a laser removal center.

The Commitment
The larger or darker your tattoo the longer you’re going to have to commit to using this, since it’s a gradual fading out process and takes time to work. Even the most expensive ways of removing tattoos, like laser removal, take time to work, so you’re looking at investing some time in this no matter which route you go.

Evaluation
Tat B Gone has received mostly negative reviews from users, and the over consensus is that it doesn’t work. The before and after photos showing the tattoos gradually fade away isn’t very convincing, and could easily be manipulated using a photo editor like PhotoShop. It wouldn’t be too hard to provide proof that this works, it would require a time lapse video of someone taking a picture each day for however many days was necessary. That would be harder to fake, and would show the real results in real time as they happen.

We’re giving Tat B Gone the Thumbs Down rating based on user feedback, the lack of credible proof that it works, and the inherent logic behind why it wouldn’t work. Of course there are those that said they saw results, but it’s a small percentage, making it unlikely that it would work for most people. Those that reported success with this said that it took a long time to see results, and that the results came sporadically, not evenly over the tattoo, so if you do try this you should be prepared for a marathon battle and high long-term costs.

Our Recommendation
Removing your tattoo is serious business, and you’ll likely find it much more of a hassle than when you had it inked. This is because the really effective ways to remove it are more expensive than getting the tattoo, and the cheaper options are either less effective, take longer to work, or don’t work at all. We recommend saving up for laser treatment if you’re insistent on getting it removed, as this is the most proven technique with the highest percentage of success.

What do you think? Does Tat B Gone work or not?

569 Customer Reviews on “Does Tat B Gone Really Work?”