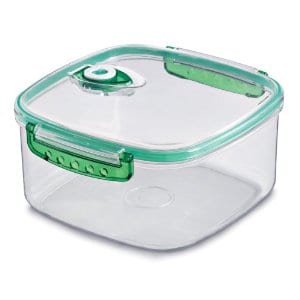 freshvac food storage containers feature a unique way to suck the air out, creating a vacuum seal. They say that the reason foods don’t last as long in ordinary containers is because they trap air inside, even though they’re airtight. They also say that you can tell your foods are fresh because you can hear the air being released when you reopen them. But how well do these really work, and what are real users saying about their reliability?

Overview
The food storage container industry is actually pretty big business. There are dozens of companies that are making their money just producing plastic and glass storage units for leftovers and lunch containers. When you think about it, it is a pretty important part of the kitchen, and if you don’t have a reliable way to store your food you could end up throwing out a lot of perfectly good food, which is pretty much the same as throwing money away. So let’s see if this is the fix we’ve been waiting for.

The Claim
freshvac claims that their containers suck out the air, and they say the proof is there because with certain foods like dry cereal you can watch the food get blown out of the way when you unlock the seal. They also say that it is the air that gets trapped in with the food that causes the spoiling. There is some truth to this, because that is why vacuum sealed food products seem to last so long. All that is required is pumping the air out by pressing on the top of the lid. The seal on the top is easy enough to undo, releasing the vacuum pressure, and allowing you easy access to your food.

The Hype
The hype comes from so many companies coming out with different ways of storing your food, and no one coming up with the killer app that totally takes over the industry. There are still plastic baggies, vacuum sealers, food storage containers with airtight seals but no vacuum, disposable containers, and glass ones as well. All of them would have you believe that they are the end-all be-all to your food storage concerns. But unfortunately none of them have been able to seal the deal, so to speak.

The Cost
There is a wide assortment of freshvac containers, but just to give you an example of the kind of prices you will see, they have a 10 cup square container for $15. This makes them more expensive than the disposable kind of containers you can find at your local supermarket. But they are designed to be dishwasher safe, and can also go in the microwave and freezer, so they should last you long enough to justify the additional expense.

The Commitment
When you think about it, finding the right food storage container could really result in you spending less time shopping at the grocery store. If you save enough food to replace a few meals a week with leftovers, that is two meals that you don’t have to shop for, prepare, cook, and clean up after. That’s a lot of time savings, in addition to not wasting the food by having to toss it out. It depends on how far you want to take it, and how dedicated you are to storing all of the food that’s left over after dinner.

Evaluation
The concept behind freshvac containers is a sound one, and you can see how they would work just by using them. Pressing the air out of the specialized valve makes it so that you get the equivalent of a vacuum seal for your food. Releasing that seal and hearing the sound that it makes is proof positive that it was actually able to keep that seal while it was storing your food. Out of the reviews that are coming in, it’s showing that the sealing mechanism does in fact work, but the rub is that it doesn’t work for long.

When put to the real world test they don’t live up to their expectations, with most users saying that they do provide a tight seal at the beginning, but aren’t able to hold it. They also say that with repeated use they break rather easily, and the hinges on the sides don’t hold up. This is rather unfortunate, since they had so much potential.

We had high hopes for freshvac food storage containers, but the number of people that have said they don’t work very well is hard to ignore. You can still try them out if you want, but just be sure to set reasonable expectations for them, and don’t expect them to blow your mind the way they first appear like they will. The overriding consensus is that you have to be very delicate with these, and through regular use they just don’t last.

Our Recommendation
With so many different options available to you in the world of food storage containers, it’s not the end of the world that these don’t work as well as you might’ve hoped. There are products like the OXO Good Grips that are specially designed to fit your hand well and are able to open and close with just one hand. Then there are the Kinetic Go Green containers that are infused with nano-particles that are supposed to be able to kill the bacteria that is responsible for spoiled food.

What do you think? Do freshvac food storage containers work or not?

← Previous Does the Flat Belly Diet Really Work?
⚅ back to blog
Next →Does Secrets to Dog Training Really Work?