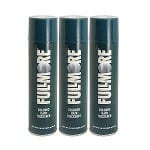 Hair loss can really take a hit to your confidence, and Fullmore says he can get back in 30 seconds. That’s pretty fast, and a pretty bold claim from something that comes in a spray can. This is no miracle hair loss treatment, and it never claims to be. It purely works on the cosmetic level and is not designed to treat or cure your thinning hair problem. But having said that, doesn’t work?

Overview
Products to cover up hair loss have been around since men started wearing wigs to cover up their male pattern baldness. Our founding fathers may have even started the trend. These evolved into toupees, and now we have products that are sprayed onto the head to produce the same effect. The underlying flaw to these kinds of products is that it’s rather obvious to go from thinning hair or bald to a full head of hair the next day. So let’s see how Fullmore gets around this problem.

The Claim
The main claim from Fullmore is that it can give you thicker hair in half a minute. The only problem is they aren’t making your hair thicker, they are just sticking their product to it. At the end of the day the product is washed down the drain and your hair is back to its normal thin self. This seems like a lot of trouble to go through every single day and could even cause more damage to your confidence if people call you out on it.

The Hype
The hype for Fullmore comes from the fact that the same sort of product has been around for decades. Perhaps you remember Ron Popeil trying to sell basically the same exact system, calling it Great Looking Hair. He would pull people from the infomercial audience, spray paint their hair, and get everyone to ooh and aww over it. It must be hard to market and sell a product that is so similar to something that was laughed at 20 years ago.


The Cost
One of the main attractions to using Fullmore is its price. Many people compare the product to HairCubed, and say that Fullmore is a much cheaper alternative that lets them use as much as they want without worrying about running out and having to buy more. At around $22 including shipping we’re calling this price about average for what it is, and what it does.

The Commitment
When you start using something like Fullmore you’re basically signing up to use it perpetually. If you’re going to pull off the illusion of thick hair after everyone has seen you with thinning hair or bald spots, you’re going to have to ease your way into it so you don’t look like you magically have hair now. Also, you’ll have to use the same amount of Fullmore everyday to keep appearances up.

What People Are Saying
There are mixed reviews when it comes to whether or not Fullmore does what it says it can do. Some people rave about it, while others say they used it once and threw it back in the box. Many companies out there will post fake positive reviews, and there are other companies that will also post phony negative reviews. That’s why it’s important to disregard reviews you see that lavish praise on a product. Also, if you spot a review that dogs a product and then recommends another competing product, that’s probably fake too.

This makes a hard for the consumer to ascertain whether or not something works. However, when looking at the aggregate data it becomes clear that Fullmore does work for most people most of the time. It is important to follow the directions included with the product, and failing to do so can account for some of the negative reviews out there. Also, it’s important to know that you shouldn’t judge a product due to technical difficulties. If there is a defect with a bottle, that doesn’t mean what’s inside it isn’t working.

When compared to a similar product like Toppik, Fullmore works just as well but with the convenience of a sprayable can. Whichever method you find more convenient is the one you should go with. Some people like spray cans, other people think this wastes a lot of product.

You can even use the products in conjunction with each other, spraying your hair with Fullmore to get the bigger spots, and then going over the general area with Toppik to fill things in completely. They are both manufactured by the same company, so you’re assured quality from each one.

Our Recommendation
Fullmore can be very helpful to those with thinning hair and bald spots. However, it’s important to know your exit strategy when using something like this. It’s also a good idea to have an entrance strategy so that people don’t ask you what you did to your hair to make it look this way. Gradually ease your way into using Fullmore, and also treat your hair for the cause of your hair loss so that you don’t have to use it forever.

What do you think? Does Fullmore work or not?