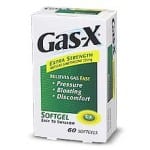 Simethicone is an orally taken substance that is used to prevent foaming and can therefore be used to reduce the effects of a bloated stomach and this agent is the active ingredient that is found inside Gas X. There are many products worldwide that contain Simethicone but Gas X is the biggest and most well-known brand containing this substance.

Overview
Gas X was first brought to the market in 2004 and since then the brand has grown to what it is now and challenging for the title of being the leading substance as a cure for excess gas in the stomach.

The substance comes in the form of a pill that is intended to be swallowed. The best effects of Gas X are seen when the pill is taken prior to a gassy or potentially bloat-inducing meal so that the substance is already in the system and waiting for the food to help break it down.

The Claim
The headline campaign of Gas X is simply two words “Pressures Off”. This does two things to promote the brand and convey confidence into the user. Firstly it gives the impression that it will completely remove the pressure of excess gas and a bloated stomach, as well as giving the user the idea that by using this tablet, they will no longer have any worries about having a bloated stomach or embarrasing gas.

The company that distributes Gas X also says that there are few to no other pills that will act as quickly as Gas X will at breaking down gasses in the stomach and relieving the consumer by claiming “unbeatable speed”.

This is a good claim for a product for those that feel the effects of gas, but there is no claim made about the longer-lasting effects for those consumers that experience gas all through the day or on a continual basis.

The Hype
The selling point of this product is clear and targeted. Gas X is not a product that will be bought by all consumers as an everyday, must-have item as say aspirin is. However, by targeting the market for those with a poor tolerance to gassy foods and substances the market is still open to around 140 million people a year. Bloated stomachs can affect people in different ways and at different stages throughout their lives. Each person will have a different ideal cure but the Simethicone agent found inside Gas X is wide ranging and almost certain to cure even just the mild discomfort and belly pain caused by gas.

The Cost
The price for 120 soft-gel pills of Gas X is currently retailing at around the $15 mark, but there are lots of companies that are offering the treatment as part of a multi-buy deal.

The Commitment
As well as consuming the Gas X soft-gel pill, there are a few other things that can be done to decrease the discomfort felt from bloated stomachs. Such simple things as increasing your intake of water and decreasing your intake of fizzy and alcoholic drinks will aid hugely. Eating slowly and avoiding foods such as broccoli, beans and bran will also help you in your cause.

Smoking and swallowing air inadvertently are also big contributors to feeling bloated, as is drinking through a straw. Now these are not rules that you must obey while you are taking the Gas X pills, but will significantly help with reducing stomach discomfort.

Evaluation
Some of the “designer diets” of today’s modern world are high in protein and fibrous foods which is great for the well-being and health of the body and are great at reducing calorie intake. However, these foods are often highly gassy and will cause discomfort and build up large amount of gas in the stomach which is a factor of how they work; by making the dieter feel full.

This can often turn users away from the good foods and back to the fatty and less gassy foods which cause less discomfort, which is obviously not ideal. Therefore, Gas X can be taken as a pill that will curb this problem and create a harmonious tummy with zero ill effects.

It is very easy to get a picture of the general consensus of how this product works and if it is indeed effective. Gas X is rated highly by those that have used and reviewed it, but is not the preferred choice by many users. However, Gas X does work and does reduce bloated stomachs.

Our Recommendation
Gas X has no harmful side effects and so can only be a good thing to reduce gas. However, it should only be used when the stomach is bloated and gassy to avoid the Simethicone from breaking down other substances internally.

Having said that, all the reviews are good and this product is definitely worth a shot at curing an irritating bloated stomach.

What Do You Think? Does Gas X Really Work?