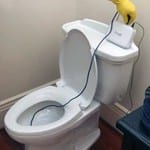 If you stumbled upon their website back in 2007 you might have been partially convinced that Google TiSP was going to be the latest and greatest technology. It had many people scratching their heads wondering, could this really work? Like the best of jokes, this one had a hint of truth to it, just enough plausibility to be believable.

Overview
Dating back to 2007 Google TISP was a hoax put on by Google for it’s annual April Fool’s Day prank. TiSP stands for Toilet Internet Service Provider and at the time it came out it made sense because analysts were predicting that Google was thinking of providing Internet service as a business model.

Their April Fools shenanigans date back to the year 2000 and they’ve been actively involved with it ever since. It’s part of what makes them different from other companies and more approachable for users. By showing that they have a sense of humor, they help people connect with them and be more likely to use their services. It is similar to their practice of the Google Doodle, where they change their logo according to different holidays and events.

The Claim
The claim was that Google was going to provide high-speed Internet by means of a not-so-glamorous wiring scheme using existing plumbing lines. Many of their tricks involve the launching of new, outlandish product or service and this one was no different. It’s amazing that people fall for these year after year, but they are professionally produced and look similar to other offerings throughout the year.

The Hype
Google TiSP didn’t need much hype to get going, all it required was a link on Google’s main page. Since hundreds of millions of people start their Internet time with a Google search it didn’t take long for it to become a phenomenon. Many of these pranks are believed to be real, at least for a short amount of time, and then Google users are embarrassed for believing the lie. At least for most they get to save face behind a computer screen.

The Cost
The cost of Google TiSP, like almost all of Google’s products and services, was free. However, similar to their free email service Gmail, in which your email is scanned by a computer and then you are served relevant advertisements, TiSP would have involved Google scanning your, er, output, using DNA sequencing. By analyzing your waste they could make dining as well as health recommendations. This may sound a little crude, but also has a tinge of possibility in the distant future.

The Commitment
The commitment level was pretty high for this service. In theory you would have had to have gotten up close and personal with your toilet, dropping down the weighted fiber-optic cable line and flushing it down. You would also have been responsible for troubleshooting the connection in case of any problems.

Evaluation
The beauty of this prank is that while it sounds a little gross, it does make sense to use existing plumbing that every house has in order to deliver Internet service. It’s similar to the idea of using the sewer system to deliver packages, since it’s already in place and wouldn’t require great investments or re-inventing the wheel.

No. It was just an April Fool’s Day joke. Google goes to elaborate lengths trying to outdo their previous jokes, and they seem to have an entire department responsible for make their outrageous claims somewhat believable. For a company that is always coming out with new free services, it’s hard to separate the real from the phony, and this plays to their advantage.

Our Recommendation
Don’t hold your breath for Google TiSP. It was just a prank by Google to allay some of the talk of them supplying free high-speed Internet to all American households. It was a tongue in cheek way of Google showing how much infrastructure would be required in order for them to do this. Rest assured, when they want to give everyone ad-supported no-cost high speed Internet, they’ll find a more chic way of doing it that doesn’t involve the toilet.

What do you think? Does Google TiSP really work?

← Previous Will Ancestry.com Really Help Me Trace Family History?
⚅ back to blog
Next →Does Ear Candling Really Work?