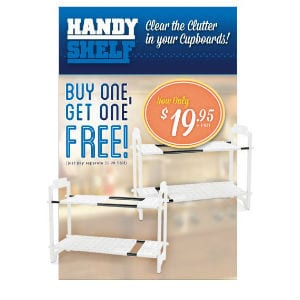 Handy Shelf is a customizable shelf that is primarily designed to figure out the situation under your kitchen and bathroom sinks. It seems like it would work at first glance, but what about what actually happens in real situations?

Overview
If you’re like most people the space underneath your sinks is likely a strange place filled with whatever you can fit under there. That’s because the piping makes it hard to have any sort of uniform storage space, so you’re often left with some tall things, some short things, and a lot of space going unused. Or so the theory goes.

The Claim
The makers of Handy Shelf claim that it fits easily under your kitchen and bathroom sink so that you can use that space to store things rather than it being a big mess of a hodge podge of items that happen to fit. By adjusting and customizing itself with trays that can be removed and reinserted, they say you can make any number of configurations to accommodate any sort of plumbing that’s going on underneath.

The Hype
This is an instance of a problem you didn’t pay much attention to until you saw the infomercial on TV alerting you to it. Now it’s probably bugging you that all of that space under your sinks is being wasted, and you’re hoping for the day that you can reclaim that space in the off chance that it will solve your kitchen and bathroom storage needs.

The Cost
They have the Handy Shelf retailing at $20 plus $8 shipping and they send you a 2nd one but you have to pay the additional $8 shipping. This brings your total to $36 shipped to your door, or $18 for each shelf. You are probably aware that you can buy plastic shelving units for far less than $18 each, so they are hoping that their ingenuity is worth the extra cost. They provide a 30 day guarantee on the product, but they have it so that you only get the original $20 back and not the $16 you shell out for shipping.

The Commitment
Once you have these shelves in place you can basically forget about them. It should only take a few minutes to figure out how to get them under your sink , and which configuration works best for your particular pipes. But once it’s installed you shouldn’t have to worry about it again.

Evaluation
The way Handy Shelf is customizable means that no matter what you’ve got going on under your sink in terms of pi[es you’ll still be able to use the space on either side of them, and bleo them. This is nice because many times you’ll want to store cleaning products and other kitchen or bathroom related items and you can’t really because the pipes get in the way. It’s up to you to determine if this is a big enough problem to spend $36 on, but we haven’t seen anything on the market that works better than this or is designed to solve the same problem.

As Seen on TV Blunders:

They also point out that you’re not limited to using this under the sinks, and they show that it can be used as a shoe rack at the front door, or in a closet to help keep things uncluttered. You’ll be getting two of them, and maybe you don’t need one in both sinks, so you’ll have to be creative as to how you use the second one.

Handy Shelf is getting our Solid Try rating, as it does a good job of solving a common problem and really does turn a wasted space in many homes to an organized space that you can actually use. It seems that they’ve made some improvements in the quality of the product from the time they shot the infomercial to the time it went into production. This is often the case as they sometimes use a prototype in the videos to get them recorded and ready to make sales, and then they finish up the product and it turns out better than the original design.

Our Recommendation
Usually we don’t like a forced by one get a 2nd one because it inflates the purchase price and often you don’t need two products, you just want the one. But his is one instance where it makes sense to have tow, because you can use one in the kitchen and one in the bathroom and you’ll free up twice as much space. It would be nice if they could price this a little differently so that you could take them up on the money back guarantee if you don’t like the way it works, but as it stands you’ll only get back $20 of your $36 purchase price so it doesn’t make too much sense to send it back, only to prove a point.

What do you think? Does Handy Shelf work or not?

← Previous Does Magna Clean Really Work?
⚅ back to blog
Next →Does the Flea Vac Really Work?