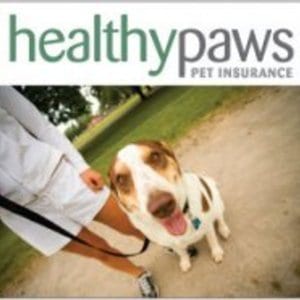 Healthy Paws says they provide affordable health insurance for your pet, and after sizing it up against some of the most popular insurance plans out there, it turns out they’re right. But how well do they protect your pet, how good are they at paying out claims, and will you be getting good value for your dollar, should the need arise?

Overview
Most people have an unfavorable view of insurance companies and insurance sales reps. Who can forget the classic scene in Groundhog Day where Bill Murray’s character is incessantly confronted by the annoying insurance salesman each day. It’s because they remind us of things that we don’t want to be reminded of, namely getting sick, getting old, and dying. When you throw the strong emotions we have towards our pets into the equation, pet insurance can be something people just don’t want to talk about. But it’s even more of an urgent matter for them, since each of our years is several for them, so it’s something you should get sorted out now, rather than later.

The Claim
Healthy Paws claims that they cover more instances than other providers, including when your dog gets sick, when they have an accident, even conditions that are specific to their breed. They’ll even cover your dog or cat in case of an emergency. They also say that their are no limits to the amount of claims and you can file in a year, or for each condition they have. They say that you’ll get a 90% reimbursement of the cost that you bear. They also say that they get your money to you quickly, that their customer service is better than the others, and they do all this for a lower cost. It all sounds too good to be true, but let’s see if they’re pulling it off.

Why Get Pet Insurance?
Some people wonder what’s better, to get pet insurance, or just start a savings account for your pet’s healthcare. The only problem with setting up a savings plan is that if you have a major vet bill to pay you will exhaust your savings account, and then have to rebuild from there. If another problem should come along while you’re trying to get your savings account back to where it was, your battleship will be sunk. On the contrary, with an insurance plan in place you are protected from multiple vet visits in a short time period. So it’s not a bad idea to think of an insurance plan as a sort of savings account, because it serves the same purpose, but is better suited to the task.

The Cost
The cost of Healthy Paws and any other pet insurance to go with is going to vary depending on the type of dog you have, how old they are, and where you live. For the example of a golden retriever that is one year old, and is owned by family living in San Diego, California, your monthly premium will be around $37, with a $100 deductible which is standard for the industry, but they don’t provide wellness coverage.

Longevity
One thing that you might be concerned with is how long, or in this case short, they’ve been in business. They’ve only been around for two years now, so it might be a little suspicious that they charge such small premiums. You might wonder if they are able to pay out claims that are submitted. When you compare this to a long established company like VPI Pet Insurance, it might cause you to consider going with something that has been around longer and have a longer track record of successful claims being paid out.

Evaluation
Healthy Paws is definitely trying to carve out their share of the market, but it is an uphill battle when you have so many other companies basically selling the same product. You might think that they are only competing on price, but they are also trying to cover more conditions, give better service, and pay their claims faster in an attempt to cause a word-of-mouth buzz about how good they are. It hasn’t seemed to happen yet, but they also appear to be on the rise, and not just getting by.

It’s interesting to note that VPI Pet Insurance, a direct competitor to Healthy Paws, has a comparison chart that allows you to size up different insurers to see which one you should go with. This chart shows that Healthy Paws is indeed more affordable than most of the other plans on the market, and the only drawback it seems to have is that some of its reimbursements are a little lower than others.

Healthy Paws can’t be ignored. They definitely merit looking into further if you are cost conscious and want to get the most value for your dollar. Take a detailed look at what is covered by their plans, and if you have a specific condition in mind, see if it is on the list of covered conditions. This is the best way to see if they are right for you and your pet.

Our Recommendation
If you want to save a ton of money by switching your pet insurance to Healthy Paws, it might not be a bad idea. We couldn’t find many people complaining about not being paid out on their claims so it appears that they are doing things right. Of course, we can’t guarantee that you’ll have a great experience with them, but so far they seem to be capturing market share and doing the things they need to do to grow and prosper in a competitive market.

What do you think? Does Healthy Paws work or not?

← Previous Does Mozy Really Work for Online Backup?
⚅ back to blog
Next →Does the Invisible Fence Really Work?