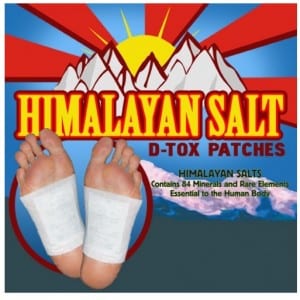 Himalayan Salt Detox Patches claim that you can help balance your body’s pH levels by wearing these foot pads overnight while you are sleeping. The result is supposed to be an improvement to your circulation, but there is a lot of skepticism that these even work.

Overview
Foot pads for detox have been on the market for several years now, and there is a split between proponents who say they work – usually those that are trying to sell detox pads – and those that say it’s quackery. Here they are saying that there are 84 elements and minerals that the body needs in this Himalayan salt, but that’s just one of several claims that doesn’t have much backing behind it.

The Claim
The makers of the Himalayan Salt Detox Patches say that you will start to feel recharged and energized after wearing their pads for 5 days straight. They say this is because the salt acts as a drawing agent to pull the toxins out of your body and into the pad. They say the proof is in the before and after states of the pads, looking clean and bright white when you put them on, and looking dark and dirty when you take them off.

They claim that the pads do all of the work for you while you’re sleeping, so it’s a painless and effortless way to detox. They say it can help to relieve aches in the body, help with sleeping problems, and give you more energy once you complete a multi-day cleansing program.

The Hype
There is much said about the powers of Himalayan salt, and not too many studies to back up the claims. It’s really about how far down the rabbit hole you want to go when it comes to the healing properties it may or may not contain, and whether you feel that such an amazing healing tool would have such a low price point.

The Cost
For a five day regimen it’s $7 plus shipping, or you can double your order for $15 with the same shipping cost. No matter how you cut it this is pretty inexpensive for a detox program, even when compared to other detox foot pads. The only thing is if it doesn’t work, why bother spending the money and fooling around with it.

The Commitment
This is the most attractive feature for these patches, since you slap them on at night and then go to sleep. The theory is that while you slumber the pads are going to work, so you don’t have to do much at all. In the morning you simply remove them and throw them away.

Evaluation
A lot of the claims rest on how much you buy into alternative medicine, alternative therapies, and the qualities attributed to Himalayan salt. So far nothing has been proven in regards to the effectiveness of any foot pads on the market, and there is a lot of doubt as to the ability of the skin to ooze out toxins into the pad.

These foot pads are a bit different in that they’re salt based, and many others use vinegar in the to perform the detox magic. Some debunkers of footpads like these say that the color changes not because of toxic substances but because of moisture in general. It might be that there is another agent that turns the salt a dark color when pressed up against the feet all night.

It’s nice to think that you could be improving your health while you’re sleeping, and if you wake up in the morning and pads have turned dark you might be fooled into thinking that you’ve actually accomplished something. But unless you have the pads analyzed to see what’s actually in them, you don’t know what is really going on, and you’re left to either believe the claims or agree with the naysayers that it’s all just absurd.

The Himalayan Salt Detox Patches are getting our Thumbs Down review. There’s no reason to believe that salt would act to suck toxins through the skin of your feet. The before and after pictures, while striking, don’t really prove that what they are saying is happening is actually happening. It’s not so much the money that’s at stake here, since the price point is so low, it’s the waste of time and the false claims that you just don’t want to be bothered with.

Our Recommendation
We recommend taking a pass on these foot pads and going with more reliable ways of clearing the body of toxic substances, like eating more superfoods, and performing various cleanses to the body. There’s little doubt that in the world we live in, toxins abound, so it is important to clean house on a regular basis, but you have to do it more effectively than taping salt packs to your feet at night.

What do you think? Do Himalayan Salt Detox Patches work or not?

← Previous Does the Bright Light Pillow Really Work?
⚅ back to blog
Next →Do Detox Foot Pads Really Work?