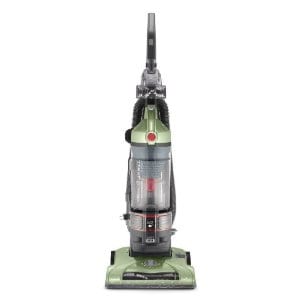 The Hoover WindTunnel T-Series has been earning their fair share of positive reviews, but many people are still wondering if this is the vacuum they should get for their home. The Hoover name is well-known in the vacuum industry, and this is one of the conventional vacuums that has felt the heat from companies like Dyson, upstarts like the Shark Navigator Lift-Away, and expensive models like the Kirby sold door to door. So what kind of experience can you expect with this vacuum, and will it hold up over years of regular use?

Overview
You wouldn’t think it, but the vacuum cleaner industry is mercilessly competitive. There are always new improvements being made, and new combatants entering the arena. Hoover has made some real duds over the years, but seems to have its act together nowadays. The only question you should be asking is whether this is the best product to be spending your money on, or is there another vacuum out there that is a better value for the dollar. For example, if you buy a $100 dollar vacuum that you have to replace every year because the motor burns out, wouldn’t it be better to spend $200-$300 on a vacuum that will last you five years or more?

The Claim
The Hoover WindTunnel T-Series vacuums claim to provide consistent suction without being too heavy, and without the need to buy and replace the bags as they fill up. They say that with their included extension rod you’ll be able to easily get into places you couldn’t before, and that it will make cleaning your home than it would be with other vacuums.

The Hype
There isn’t a lot of hype for these vacuums, the way there is for a Dyson or a Roomba. They’re basically you’re classic upright vacuum, without too many bells and whistles on them.

The Cost
The cost of a Hoover T-Series will depend on which model you go with, but it will right around $100 or a little more if you want extra features, like extra pet hair effectiveness. You can also expect to pay a little more for the bagless version, making up for it by not having to buy bags.

The Commitment
These vacuums aren’t going to do the job for you the way a Roomba will, so be prepared to do your own vacuuming. They stress that these are light and portable so you should have less of a struggle lugging it around the different rooms, and even up stairs. Depending on what sort of vacuum you currently have, this could mean less time spent fighting with your vacuum.

Evaluation
There are several different models in the Hoover WindTunnel T-Series, and each one has its own unique function. For example, there’s a model that is specifically for pet hair, and would appeal to homes that have one or more pets hairing up the joint. There are also bagged versions and bagless versions, depending on which one you like more. Most people prefer bagless, but some find that bagged models trap the dirt and dust better.

One thing to consider when buying a vacuum is how well it really works to get the dirt that’s in your carpet. One tactic used by door to door salesmen is to pit your vacuum against theirs. They do this by letting you vacuum with your current vacuum and then go over the same spot with theirs. They actually show you all of the dirt they were able to pick up, from underneath your carpet. This shows that most conventional vacuums just don’t have enough suction. So be sure that you go with a model that provides enough power to get the job done right.

One thing we noticed is that there are a ton of reviews for these vacuums, and the majority of them are positive. People really seem to enjoy the models that are in this line. Some of the features that users have pointed out that they liked are the way it’s easy to empty the canister, and also how light it is when trying to move it from place to place. Usually a light vacuum also means it’s prone to break, or made up of cheaper plastic, but in this case it seems to be able to take a beating.

The Hoover WindTunner T-Series is a well-reviewed vacuum from a brand name that has been around for decades. It seems to be a solid purchase, but there are other brands that are sprouting up that are ready to give this a run for the money. The only problem with going with a brand that has been around for so long is that sometimes they are slow to adapt to new technologies, and tend to rest on their laurels until a competitor comes around and start stealing market share with a better product. That’s why it’s in your best interest to consider a vacuum from an upstart company that is shaking up the status quo.

Our Recommendation
You might not think of a vacuum as a major purchase, but it’s important to consider your different options and make the right choice. If you don’t, you could end up having to replace your vacuum before long, which will mean paying more than you should have. Compare the Hoover WindTunnel T-Series to the Shark Navigator Lift-Away as they have very similar features, and are roughly the same price point, with many people saying they love their Shark.

What do you think? Does the Hoover Windtunnel T-Series work or not?

← Previous Does the Usui Reiki Healing Master System Really Work?
⚅ back to blog
Next →Does Forex Replicator Really Help You Trade?