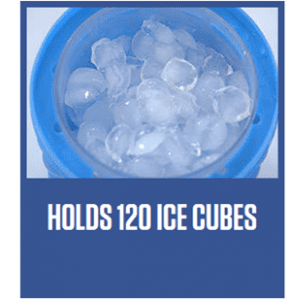 Having enough ice for any type of social get together can always be problematic, especially if you have a large amount of guests and a short amount of freezer space. You don’t always want to ask people to bring ice along with them, even if it is a BYOB party,( bring your own booze). With that being said, finding a way to keep enough ice in the house during one of these get together’s may now have been solved with the Ice Genie.

Overview
Although it’s still fairly early with the Ice Genie being a new type of product, it’s pretty basic in the concept of what it’s trying to deliver to its customers. Basically the Ice Genie is a Manual ice maker designed to save you a bunch of space in your freezer by being able to replace more than 10 of the traditional ice cube trays that you buy in the store. It freezes 120 at a time. Another good benefit of this little item is that once you’ve filled your containers with enough ice you can use this little handy container as a drink holder to store pop or other items you may want keep cool.

The claim of the Ice Genie and what makes it attractive to customers is the fact that you’re able to free up so much freezer space, while at the same time being able to generate quite a few ice cubes at the same time. It states it’s able to replace up to 10 regular ice trays meaning that it can hold up to 120 ice cubes at once, which is basically enough for at a good size group of friends or family members if you’re holding some type of get together. It’s supposed to be dishwasher safe and because of its finish you basically should be able to just rinse it off after each use.

The Hype
I guess the main hype about the Ice Genie is that you’re able to effectively freeze so many ice cubes at one time, utilizing so little space in comparison to the old fashioned way of using trays to freeze your cubes individually. It is particularly great if you’re having a small to medium size get together and you need to have enough ice to accommodate everybody that’s looking to have some type of mixed drink. Once you’ve accumulated enough cubes you can actually then use the Genie as a type of cooler that will help to keep your drinks cold while openly storing them for your guests as a drink holder.

The Cost
The price of the Ice Genie is actually quite affordable at a cost of $14.99 plus $4.99 shipping. There is actually a special offer currently being held right now where you can actually get a second Ice Genie for free as long as you pay the $4.99 shipping charge, bringing your total cost to $24.97 before taxes of course. This is the cost of the shown on their website, as well as the as seen on TV commercial page.

The Commitment
The commitment with the Ice Genie is that it will deliver you far more cubes of ice than the standard trays, 120 at a time, they are dishwasher safe, a bright blue color and with just a little bit of strength needed from your hands in order to break up the cubes, they really do deliver on what they promise their customers.

Evaluation
So far in my opinion the evaluation of the Ice Genie is a positive one and so far what I’ve seen on line there been more satisfied customers than there have been any type of complaints. The idea of the product itself is a good one and it does deliver on the fact that it is able to easily provide more ice cubes than any other type of delivery service is not electric.

The final product in review shows that the Ice Genie at the cost advertised is well worth the money and especially for those individuals that entertain on a regular basis and need ice cubes more so than the average individual, or family for that matter, this product is again something that would come in quite handy. We are prepared to give it a thumbs up.

Our Recommendation
Aside from ice cubes there are other ice products that can be really beneficial like the Icential.

What do you think? Does Ice Genie work or not?

← Previous Does the Picasso Tiles Really Work?
⚅ back to blog
Next →Does the Tao Tronics TT DL LED Lamp Really Work?