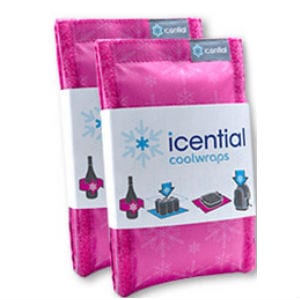 Icential is positioning itself as the best way to keep cold foods and beverages cold. It says it’s better than ice packs, better than coolers, and will keep your stuff cold in an eco-friendly way. But how well do they really work?

Overview
Keeping things cool is a problem that generally pops up every summer, unless you live in a climate that has moderate temperatures year round. The standard method of using a cooler filled with ice, or a big bulky ice pack is what most resort to, with limited results. Nothing is going to get an aluminum can colder than keeping it on ice, but sometimes that’s not practical. And if you try to store food for a picnic or other even on ice, it can turn into a big mess pretty quickly, and generally doesn’t do the best job of keeping the food cold.

The Claim
The makers of Icential say that it stays cold for up to 10 hours, so you can leave the house feeling pretty secure that you’ll be able to keep your food and drinks cold enough long enough. They say the gel technology is supposed to be far superior to what’s currently out there. They say you can wrap the inner part of a cooler and it will function just like a big bag of ice poured in. This would be far preferable than ice, which melts, is heavy, and is expensive when buying it buy the bag, since it’s not reusable in any way shape or form.

The Hype
The hype is that you might be able to change the way you currently handle your daily packed lunch, or those times when you head to the beach or the lake, or out camping. This could really be a big part of your summer experience. Less so during the winter months, but since you can use these again and again they’ll be there for you next year.

The Cost
The Icential packs go for $33 and you end up with two sets of blue and two sets of pink. That’s a total of four of them, or about $8 each which includes having them shipped right to you. It’s understandable that these would go for more than a traditional ice pack. And when you consider that a 20 pound bag of ice is going to run you $4 a pop and only last you one day, it’s not a bad way to go if this can save you on buying ice just to keep a cooler full of food cold. You can decide whether you want to have all blue, all pink, or two of each one, which is pretty nice to be able to pick.

They say that this can save you up to $3000 a year, but it’s hard to imagine that you’re currently wasting even close to that amount in food and drinks due to a lack of ability to keep them cold, or spending that much in ice or ice packs to keep them cool. They are saying that because you opt for fast food for lack of better food options on the go, you’ll save that much in fast food costs. That’s a bit of a stretch, don’t you think?

The Commitment
This is billed as being a reduction in your commitment level because you wont’ have to go to the store, you won’t have to lug big bags of ice, and you won’t have to suffer the costs of those bags of ice. Also, the same goes for conventional ice packs that are big, bulky, and don’t seem to stay cold enough long enough to get the job done.

Evaluation
The Icential concept is a good one, and there does exist a gap that isn’t filled between conventional ice packs and bags of ice. The cool part about them is that they connect together, so you can tailor them to fit your needs. If you just need it for one beverage you just wrap up that beverage and it’s almost like a frozen koozie. When you start connecting them you can do pretty much whatever you want with them. For us, the killer app was being able to line the cooler with them. This seems like a far easier way to keep a cooler cold than a bag of ice, and you’ll have plenty more space for the actual food instead of having to budget so much space for the ice.

Also, when ice melts in a cooler it just ends up getting into everything that isn’t in a watertight container. This means that sometimes you get to where you’re going and your potato salad is swimming in melted ice water. Gross! These cooling pads should keep it cool without making a mess.

We like Icentials and think that they’ve done a great job to bring a useful and innovative product to the market, without charging too high of a price point. They have it set up so that you get the second unit free, and we like that they charge a reduced shipping charge on the second unit, so they’re not just trying to inflate the total purchase price.

Our Recommendation
If you’re tired of throwing your money away on ice, perhaps the most disposable product in the world, you owe it to yourself to try these out and see if it can solve the problem once and for all.

What do you think? Does Icential work or not?