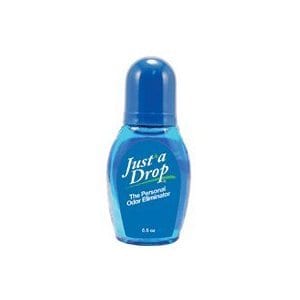 Just a Drop promises you’ll be rid of bathroom odors by using just one drop of their anti-odor formula before you go. This would be music to the ears of those that are self-conscious about having to use the bathroom during social situations that can create embarrassing situations. So can this really solve the problem of public pooping?

Overview
Even though we all poop there’s still a social stigma to it and most would want to avoid it altogether, opting to go only at home. There are a few different ways you could use this. You could make it a staple in your own bathroom and encourage your family to get into the habit of using it each time they go to the bathroom. You could carry a personal supply with you in a purse or pocket to make sure you don’t leave the place smelly if you’re at work or visiting a friend’s house.

The Claim
Just a Drop has the claim right in the name. They say you only have to squeeze out one drop into the toilet bowl before you use it in order to eliminate odors before they have a chance to fill the bathroom. They say it gets rid of 98% of the odors you’re worried about.

The Hype
They hype this up by bringing up that it’s been on the Dr. Oz Show, The Doctors, Ricki Lake, and others, but this simply shows that endorsements on these programs can be bought. Dr. Oz and the hosts on The Doctors are doing those shows in order to make money, so their recommendations should be taken lightly, but more often than not they create a buzz about products out there that don’t really warrant it.

The Cost
The cost of Just a Drop is reasonable, and they say that it’s less than 2 cents a drop. The have two bottle packs for $16 and have it set up so that you can mix and match between the different scents. They also offer various sizes, including mini sized bottles, and larger family sized bottles for use at home.

The Commitment
One of the more interesting features of this idea is that you don’t have to use a spray when you’re finished. Nothing is more obvious than having to go, and then having to spray an aerosol spray with its distinctive sound. It basically announced to anyone within earshot that you just stunk up the place. But by dropping a drop of this in the toilet before you go, it’s noiseless, and as long as it doesn’t take you forever to release the goods then no one even has to know that you went number two.

Evaluation
Dr. Oz says the way this works is by creating a film on the surface of the toilet water that prevents the poo from being exposed to the air and therefore should remain odorless. But this explanation is not to be found on their website so it’s unclear whether this is what is actually happening to get the job done.

The reviewer in the above video calls this Just a Flop, but even he says it worked pretty good, but he deducted points because he focused on the term “eliminator”, and mistakenly thought that this was meant to eliminate the odor entirely. Most people are looking for something that reduces the odor to the point where you wouldn’t have to be embarrassed by it. There will also be a use-by-use difference based on the quantity and type of poop it’s dealing with.

Just a Drop is getting our Definite Try rating, as it seems to produce sufficient results for the price. Most people say that it works to some degree, but perhaps not as well as you might have hoped. They readily admit that it doesn’t eliminate all of the odors, so it’s simply a matter of whether or not the smell it leaves behind is strong enough to call it a loser. Perhaps guys might need to use an extra drop if they feel a big one coming on, but for most users one drop is enough to diffuse a potentially embarrassing situation.

Our Recommendation
If you’re looking for a fix either for workplace poos or when you’re on the go or at a friend’s house this should be of great help to you. At home the combination of this and traditional potpourri spray should be a one-two punch that takes care of odors completely. There’s really nothing to be ashamed of since we all do it, but it’s really an act of courtesy to others so they don’t have to smell your output. If we all took common courtesies like that the world would be a better place, or at least a better-smelling place.

What do you think? Does Just a Drop work or not?

122 Customer Reviews on “Does Just a Drop Really Work?”