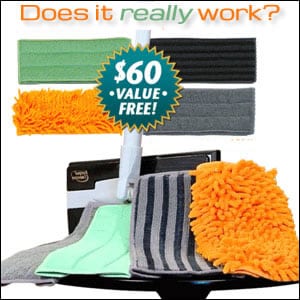 Cleaning the house can definitely be a chore, the makers of Keeper Sweeper say that it can also take a toll on your budget as well. It’s hard to deny that when you tally up all the costs of cleaning products, including mops, brooms, cleaning sprays, rags, and everything else it really adds up. But can you really do all the jobs that they say you can do with the Keeper Sweeper, or will you end up reverting to your old cleaning ways and expenses?

Overview
most of us are familiar with the popularity of the Swiffer Sweeper and Swiffer Wetjet mopping system that came out a while back. The Keeper Sweeper is similar to that, but goes a step further by saying that he can do more than just sweep and mop your floor. It says it can do all sorts of things like dust, wipe Windows, and scrubbed things like the bathtub.

The Claim
The Keeper Sweeper claims that the magic happens because of its four interchangeable and patented cleaning heads. Rather then having to have four different cleaning tools to do the different jobs on your house, all that’s required with Keeper Sweeper is to change out the top of it and you change jobs.

The Sweep and Mop pad is supposed to be used on hardwood floors or linoleum, and is designed to replace your broom. The Duster pad is claimed to be able to be used on things as delicate as an HDTV screen, and can be used with the extender rod so that you can reach things like the top of ceiling fan blades. They also have a Scrub pad, so you can take off things like scuff marks on linoleum floors, and also get at messes the Sweep and Mop pad left behind. They also have a Glass pad so that you can clean all of the windows and mirrors in your house, using just warm water and no glass cleaner, and without scratching the glass.

The feature that they should push more than they do is the the heads stay on to the handle. It basically clamps in place so it won’t fall off, in stark contrast to the Velcro systems used by the sweeping systems you can buy at your local supermarket.

The Hype
The hype is that they say you can clean your entire home with the Keeper Sweeper. Basically, you’ll still end up using other cleaning products around the house for specific tasks, but the Keeper Sweeper can put a dent in the amount of other products you use so does come pretty close to it’s claim.

The Cost
They claim that they save you over $200 per year as opposed to disposable pads that come with things like the Swiffer Sweeper or WetJet. We don’t know how accurate that figure is, but the reusability of the pads is definitely a good thing. You just have to first reverse them to do twice as much use out of them, and then toss them in the washing machine when they get too dirty.

The Commitment
If you’re a neat freak and always find yourself cleaning your house, you won’t really need to make any extra commitment to using the Keeper Sweeper, and it will probably make your life a lot easier. A lot of the jobs it does, to be a real pain using conventional methods, so being able to quickly sweep, mop, and scrub your floors will definitely be a timesaver and a lifestyle upgrade.

Evaluation
Perhaps they go one step too far by saying you can clean all of the areas in your house with one device. It’s not as if you want to switch from cleaning your floors to cleaning your countertops all with the same pad. Although they do send you a second set of pads, so you could designate one set for the floors, and another set for everything else around her home.

Users of the Keeper Sweeper system have said that the does do a good job at getting their house clean, and functions very close to how it is depicted in the infomercial. It’s not as if they’ve invented the wheel here, it’s basically something that’s been around for quite some time, they’ve just made it a little better by tweaking the design, and adding the multi-function heads.

The verdict is in and Keeper Sweeper gets the Thumbs Up. It is typically the products that have the simple design that end up living up to expectations. The claims made are not too outlandish, and it was easy to see that the product does what it says and can get your home clean a lot quicker than the methods you’re currently using.

Our Recommendation
We recommend getting a Keeper Sweeper set for your home. Even though it might not replace all the cleaning products you use on a regular basis, which is their main selling feature, it still has a lot of value by making the jobs you have to do anyway more enjoyable, and easier to accomplish.

What do you think? Does Keeper Sweeper work or not?

← Previous Does Trendy Top Really Work?
⚅ back to blog
Next →Does BigCommerce Really Work?