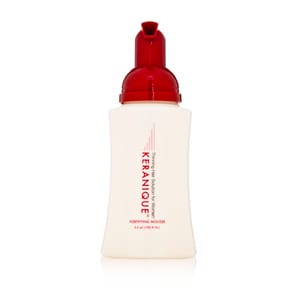 Keranique claims that it’s specifically for women with thinning hair, and it promises to make it thicker and fuller. It’s not every day that you find a product that is catering just to women. The usual case is a product that is formulated for men, and then they add women as an afterthought because most of the attention of hair loss gets placed on the men. While it may be true that men are effected more often and more severely with male pattern baldness, women also suffer, many in silence, as their hair gets thinner and thinner and eventually is noticeable. But can this really help turn it around?

Overview
Men have hundreds of products to choose from to treat their baldness, but for some reason women don’t have a lot of products vying for their business. Maybe thinning hair doesn’t seem like as big a problem as going bald, but it can evoke the same sort of psychological repercussions in women as going bald does in men. It can lead to low self-esteem, low self-worth, and a bad self-image. It can alter the way a woman wears her hair, and can even effect how often she goes out in public. Men can just put on a hat if they’re very self-conscious, but women are expected to show of their hair as part of their overall presentation.

The Claims
Keranique claims that it can give you fuller looking hair in a short amount of time. They also so that it is formulated to work specifically with a woman’s biochemistry, and that it is the only hair loss treatment approved by the FDA. They also state that it is pH balanced, and that it doesn’t contain any sulfates. Part of their kit is also designed to help you protect your hair from the damaging effects of styling, including excessive heat and brushing and combing.

The Cost
You can try Keranique for one month by paying just the shipping and handling of $8. If you like it, it’s $80 a month, and they send you two months worth of it every 60 days. If you don’t like it, you must call them and cancel your order before the 30 days is up.

The Commitment
If you’re going to try this out, commit to giving it a proper trial. Make sure that you use it every day as directed so that you can see whether it is worth keeping, and whether it is worth the price to continue using it. If you like the results you’re getting, it is not an unreasonable price to keep your hair looking its best. If you’re unsatisfied with it, you’ll definitely want to remember to cancel your order, because it is a price that you wouldn’t want to pay unless it’s effective for you.

Evaluation
Keranique is getting positive reviews, but you have to be sure to ignore the people that are reviewing the billing process, not those that are reviewing the product itself. If you get it and you don’t like it and you forget to cancel the next shipment, you aren’t going to be very happy. If you get it and like the results you’re getting, you likely aren’t going to come back online and write a review on it. So you have to realize that for every one positive review you see for this, there are likely many more that aren’t being reported.

Overall though, people are saying that it does improve the quality of their hair, making it appear fuller and more healthy, and they’re happy to stay on with it month after month. Since the kit contains four different elements to it, they’ve got you covered for washing and conditioning the hair, as well as treating it with Minoxidyl, and even attempting to boost your hair follicles to give your hair new life.

Why Is My Hair Thinning?
There are many factors that contribute to hair loss in women. It could be due to hormonal imbalances which end up making your hair follicles smaller. It could be due to genetics, which you don’t really have a lot of control over. It may be due to a stressful job or home life, or it could be that you are unknowingly taking poor care of your scalp and hair. It may even be nutritional imbalances, such as a lack of protein, or an iron deficiency.

We’re giving Keranique the Thumbs Up, because when you look past all of the positive reviews from affiliates and the negative feedback from those that forgot to cancel the trial, what you’re left with is mostly happy women that are getting good results and have better looking hair to prove it. But at the end of the day you won’t know if it will work for your hair until you give it your own at-home test.

Our Recommendation
This is definitely worth a try, because it is one of only a handful of just-for-women hair loss products out there. They’ve gone to great lengths to get this to work for as many women as possible, so there is a strong likelihood that this will work for you. There is no guarantee, which is why it’s nice that they let you try it out with just a small shipping and handling charge. Thirty days should be plenty of time to decide whether it is working for you, and if you’re not liking the results, you’re not obligated to stay on with it.

What Do You Think? Does Keranique Really Work?