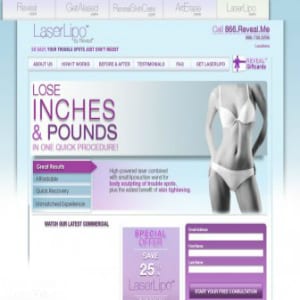 Laser Lipo is the new supposed upgrade and alternative to conventional liposuction. It is basically going for the same result, but using a different approach that should in theory make a big difference in the results you see, the pain you feel, and your overall look once it’s finished. But does it really work, or is it a gimmick to sell more procedures?

Overview
This is one of the first real change in decades to the way doctors have been performing liposuction. It’s interesting to note that it has come under such scrutiny. New procedures always do, as there are the old style doctors that don’t want to adapt to the new technology, so they won’t throw their support behind it. There are also those that don’t want to learn a new procedure, so they will be skeptical. But just like LASIK got a lot of flak when it first came out, it’s something that laser lip just has to deal with.

The Claim
The claim of laser lipo clinics is that the use of lasers makes the liposuction procedure faster, safer, and more effective. They claim that they are using the laser to melt layers of fat cells out of your body, and also to seal up blood vessels as it goes along. The end result is a less invasive procedure, faster recovery, and better results.

The Cost
The other thing about using the word laser is that you can charge more. People assume that laser equipment and training is more expensive than conventional liposuction, and will be prepared for a higher price tag.

The Commitment
As with any cosmetic procedure, you have to commit to going through with it, and putting up with any pain that it causes. Obviously this is all less commitment than losing the fat through diet and exercise, but you should still try to adopt a healthy lifestyle so you don’t grow the fat back and have to continually go in for laser lipo treatments.

Evaluation
Laser lipo is facing its fair share of scrutiny, but it’s hard to argue with results. The conventional way of doing it just seems so medieval. Sticking a big straw and sucking out fat is about the simplest thing in the world to understand. By using a laser though, they are able to melt the fat cells and then suck out the oily mess that remains. It seems like a solid way of going about this, and is a little more sophisticated than the surly approach of traditional liposuction.

Don’t Be Like Sisyphus
Sisyphus was the king of Greek mythology that had the misfortune of being punished to roll a heavy rock up a hill just to have it come rolling back down. If you get liposuction make sure you change up your eating habits and get more exercise so that you can maintain this new appearance. You don’t want to find yourself back in the doctor’s office for another round of these because you can’t get your lifestyle straightened out.

A better way of going about it is to first change your habits, and then get liposuction done on the parts that you are having trouble with. For example, if you lose a good portion of your weight on your own, but can’t seem to lose your tummy or your arm fat, get lipo in these areas so that you can enjoy the results now, and then keep them with your new healthy habits.

Laser lipo seems to work really well, as several before and after videos, as well as videos of the actual procedure seem to show it working quite effectively. Of course it’s not going to work for everyone, and some people won’t even be eligible to have it done. But if you are eligible, and you can swing it financially, and you’re going to get some sort of lipo done no matter what, it’s probably the better option.

Our Recommendation
If you’re dead set on getting liposuction, and have the extra money to get the laser version, you should probably go with it. However, traditional liposuction has a longer track record of success, so if you choose a well-reviewed cosmetic surgeon you should be able to get just as good results from them than you would with any of the new offices offering laser treatments.

What do you think? Does Laser Lipo work or not?