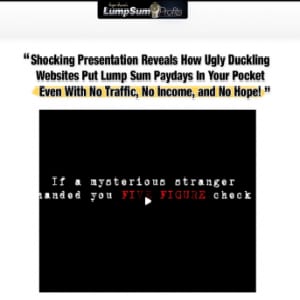 Ryan Moran makes a pretty convincing case for the concept behind Lump Sum Profits. Basically the idea here is to collect big chunk payments instead of dabbling in small monthly returns that you get from things like AdSense or other forms of revenue. You do this buy getting a website to earn a monthly income, and then selling it for several times that monthly income. But how well does this actually teach you, and can you follow it to set up your own site flipping business?

Overview
Flipping websites has been around for a while now, and what is advocated here is nothing remarkably new. They basically tell you to buy a website that needs a few adjustments, make those adjustments, and then sell the website for far more than you paid for it. Sounds good in theory, but once you start putting things in motion, you’ll see that the process is not as straightforward as it sounds.

The Claim
They claim that you can earn $2000 to $5000 paydays. The way to do it is to find a site that is already getting traffic, but is not monetizing itself as good as it could. You buy the site at a low amount, monetize it better, give it a few months or so at its higher earnings, and then sell it for much more than you bought it for, based on its new value. But most website owners that are getting traffic know that the traffic is worth something, even if they aren’t using it as well as they could. This makes the buying step of the buy and sell strategy the hard part.

The Hype
The hype is that anytime you tell someone they can make a four or five figure payday, you are playing with strong emotions. That’s the kind of money that can really turn someone’s life around, and is pretty successful at getting people to sign up for your program. However, the likelihood that someone could make this kind of money by following the information in this course is questionable.

The Cost
The cost of Lump Sum Profits is $97, but this is really just a gateway payment into other products, services, live training, and other offerings.

The Commitment
You have to be very committed to learning and trying the steps that are outlined in this course. This is no hands off system, you’ll need some start-up money, and you’ll have to use your own brain to determine which site to buy, what to do to make it better, and then how to sell it to someone else after you’ve made the improvements.

Evaluation
The course is big on theory but light on concrete steps you can take to make it work. In theory it should work, but the advice doesn’t translate to the real world. For example, if you go to Flippa to find a site that is undervalued, guess what, everyone else is doing the same thing. Plus, there is so much junk being listed on Flippa that it can be hard just locating a site that is worth buying at all.

After buying this and going through the different sections, we were unable to get enough solid information on how to successfully buy, improve, and then sell a website. The part where we got stuck on was finding a good deal on Flippa, or any other website marketplace. The system doesn’t work unless all parts of the process flow smoothly, so this can put a damper on things real fast if you can’t find a good prospective website to flip.

Even though the potential could be there to make Lump Sum Profits a good program, it doesn’t have things down to a paint by numbers simplicity, which leaves too much room for error, or even poor judgement. It mostly boils down to buying the right site. They say the money is made when you buy. But they don’t provide you with a reliable source to use to find undervalued websites. And the Catch 22 here is that if you can recognize it’s undervalued, so can someone else, and that means a bidding war will eat up much of your profits.

It also makes you wonder why someone would sell an undervalued site. Either they know something about it that you don’t, or they don’t know what they’re doing. Either way, would you want to buy a site from them? Why not just build a site yourself and avoid having to make improvements, or deal with shady sellers? In fact, many of the examples that he references in the pitch, and also in the course, were not actual flipping examples, they were build and sell, not buy and sell. Since he doesn’t go into a lot of detail on how to build a salable site, it’s not something we’re going to recommend.

Our Recommendation
Becoming a website flipper is not as easy as they make it seem. It is highly unlikely that on your first attempt you will come close to making a four figure payday, let alone a five figure one. If you got really serious about this and made it your primary focus for at least one year, you might gain enough experience and savvy to know how to make the large paydays, but unfortunately most people don’t want to put the time and energy into it.

What do you think? Does Lump Sum Profits work or not?