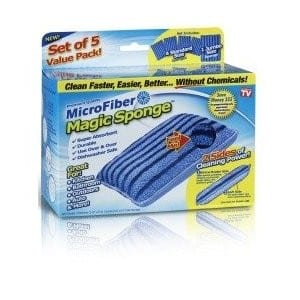 The Microfiber Magic Sponge is a wonderful made for TV product that slipped under the radar, and that most people are unaware of. But don’t worry, because we’re here to make sure that you don’t miss out on the products you see on TV that actually work. We bought this and put it to the test, so be sure to see it in action in our video below. Spoiler alert: It works.

Overview
The kitchen sponge is probably one of the most bacteria laden items in the home. When you get a disposable sponge, you try to get your money’s worth so you use it probably a little longer than you should. When you finally throw it out, it’s probably well past its prime and could even be making your dishes dirtier than when you started. When you have something that’s reusable you don’t have to wait until the 11th hour to get rid of it, you can just toss it in the wash and you’ll have a good as new sponge without having to buy a new one.

The Claim
Microfiber Magic Sponge says that it will be the last sponge you ever buy. They also claim it loosens dirt and other food items from your dishes. They also say that it it healthier because it lets you use less dish detergent and other chemicals to get your dishes and other surfaces clean. They say that it also saves you money over buying anything disposable to clean up your kitchen and other areas of your home. If you’re used to buying disposable sponges and cleaning cloths, paper towels, as well as things like 409 or Fantastik, you can buy them less often or stop buying them altogether.

That’s because when the Magic Sponge gets dirty, all you have to do is put it in the dishwasher or in the laundry with your clothes and other washables.

The Hype
The hype is that this solves a real problem for most people, and can also be considered a “green” product because it is all about using less disposable products, and also using less chemicals. With the current trend towards more eco-friendly products, this is definitely ranking up there.

The Cost
The Microfiber Magic Sponge is $10 on Amazon and it that gets you five of them in a value pack. This is a fantastic deal, because it brings the per sponge price down to the same price you pay for a disposable one. This basically makes it a no-brainer, because why would you buy something that is disposable when you can buy something that’s reusable and does a better job?

The Top Benefits
The biggest benefit to going with a reusable sponge over a disposable one is that you won’t have to buy sponges anymore, and you won’t have to let them sit and get all nasty before caving in and getting a new one. With something that’s washable and reusable you just pop it in the wash machine whenever it starts to show signs that it needs it.

Evaluation
We were intrigued by the features of the Microfiber Magic Sponge and decided to get it and put it to the test to see if it really could do all that it says it can do. The first thing we noticed that we liked about it is that it has three different cleaning services on it. On one side it has what you’d expect from a typical sponge, except that it’s microfiber and not a sponge material. On the reverse side it has a dual action surface to it, with two lines on it – one that acts to scrub and the other that acts to absorb. When you put the two together it makes quick work out of some of the toughest things that end up in the kitchen sink.

The best thing we’ve found about this sponge is that it’s not really like a sponge at all, and they probably just use the term in the name so they can give people an idea of what it does. But normal sponges end up leaving a trail of wetness behind them, whereas this is a microfiber material so when you wipe something up it gets absorbed into the fabric and not left on your countertop.

The Microfiber Magic Sponge get our Thumbs Up, and we’ve been pretty happy with it for the last several weeks. And we’re not alone in our contentment, this thing gets pretty great reviews across the board from other users. By making their scouring pad tough enough to get things loose from your dishes, but gentle enough not to scratch your pots and pans the way a Brillo pad does, is nothing short of remarkable.

Our Recommendation
They’ve got a 5 pack of these on Amazon for $10 which should be enough to equip you most areas of your house if it. We recommend keeping three near the kitchen, one designated for bathrooms, and another one in the garage. That way as you use them in the kitchen, you’ll always have a spare handy for when it comes time to toss one in the laundry. This has really cut down on our need to throw away and buy a new sponge, which makes a small difference to the planet overall, and also a small difference to the monthly budget. But hey, we’ll take it!

What do you think? Does Microfiber Magic Sponge work or not?

← Previous Does the Bissell Sweeper Really Work?
⚅ back to blog
Next →Does Jungle Disk Really Work?

2 Customer Reviews on “Does the Microfiber Magic Sponge Really Work?”