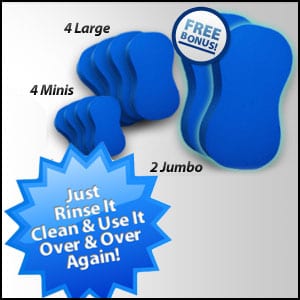 The Mighty Thirsty is a sponge-like product that hopes to distance itself from ordinary sponges because of its massive ability to soak up liquids. After seeing it in action on TV we just had to get to the real answer of does it actually work that great?

Overview
Most of us can relate to having a soppy, gross, mildewy sponge and wishing there was a better way. You might also feel a little guilty when you keep reaching for the paper towels, realizing that you’re just contributing more to a landfill somewhere. With all of the different technologies out there it seems they still haven’t found a good way to clean up common messes. That’s where this high-tech sponge hope to change things.

The Claim
The claim is that Mighty Thirsty can clean up spills and messes that an ordinary sponge or paper towel would leave behind. They say that with just one pass over a spill it will wipe it up entirely and leave the surface dry. They also say that it’s a great window washer, and you can even wipe off your windows without using any window cleaner, and it won’t leave streaks behind. They say it can hold up to 8 times its weight, but when you stop to consider how light the sponge is and how heavy water is you realize that’s not saying too much.

The Hype
This sponge has a TV infomercial that shows its abilities with various tests, showing just how absorbent it is. It was also featured in a silly stunt on the show Pitchmen, where a man was suited up in a “sponge suit” and dunked into the ocean just to see how much water weight Mighty Thirsty could hold. Some have compared it to the ShamWow, but they’re pretty different in their makeup.

The Cost
They have it set up as a buy 1 get 1, so you actually end up with 2 Mighty Thirsty sets. They give you the option rather than forcing you into the bonus set. It can also be found at other online retailers for $10, so it’s up to you which way you want to go. Compared to generic sponges you can buy at the store it’s rather pricey, but you have to keep in mind that it should be much more effective than those sponges, with far fewer drawbacks. If you consider the ongoing cost of buying paper towels it might seem like a cheaper and greener way to go for the long term.

The Commitment
If this works as shown it would be a reduction in the amount of time you have to spend cleaning up a mess, and going over it again and again to make sure it’s all cleaned up. Less time cleaning means more time doing the things you really like to do, so this is a major plus.

Evaluation
The feedback on Mighty Thirsty is actually pretty good, and it is made of extra-absorbent material by all accounts. It’s refreshing to see an As Seen on Television product actually live up to its claims and perform the same in real life as it does in the advertisement. So often they fall short and leave buyers regretting their purchase, so much so that most people are put off by these ads and reluctant to try new products they see.

But luckily it’s the Information Age and we can check out what others are saying before making a purchase, and in this case there seems to be a high likelihood that it will live up to your expectations and you’ll be able to clean up odd jobs around the home. At this price point, and because it’s a double offer, you can grab it and have an assortment of sponges that will last you a long time and will perform better than anything you currently have in your home.

The Mighty Thirsty is getting our Thumbs Up rating, and represents a case where they got one right from concept to manufacturing to marketing. The material its made of is very absorbent, and durable, so it can pick up messes you wouldn’t attempt with an ordinary sponge. The extra big size means you can wipe things up with one swoop, like you see in paper towel ads but never quite works with a paper towel, even if you get the expensive name brand ones you see on Tv.

Our Recommendation
This deserves a spot in your house cleaning toolkit. It’s a great multipurpose cleaning product to have on hand, and once you have it you’ll undoubtedly find tons of reasons to use it. Not to say that it will make you more clumsy and you’ll have more spills, but you’ll be reminded of it often as you go through life, especially if you have little ones or pets in the home and it always seems like something needs to be sponged up.

What do you think? Does Mighty Thirsty work or not?

← Previous Does the Oil Cleansing Method Really Work?
⚅ back to blog
Next →Does Prosonic Really Work?