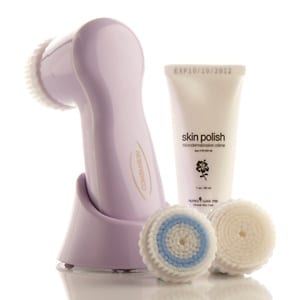 The Prosonic is an automatic facial and body buffer that claims to use sonic technology to leave you with healthier skin. Most people don’t mind the higher cost if it actually works, but the more we discovered about it, the more we… you’ll just have to read on to find out!

Overview
If you’ve ever been cleaning your face and thinking there must be a better way, you probably love the idea of having a machine do all the work. It seems everything is getting a power boost, from our toothbrushes to our kitchen gadgets. When it comes to beauty we’re all looking for a way to look our best, without spending hours in the bathroom with a daily routine, so these sort of devices make a lot of sense which is why they’ve become so popular in recent months.

The Claim
The makers of Prosonic claim that their brush can help to cleanse and exfoliate your skin. They say you’ll end up with healthier, clearer, softer, and younger-looking skin by using it. Some of the features they tout is the ability to use it at three different speeds. They say it’s 6 times more effective than trying to clean your face manually, since this is working at a sonic level to break up residue, dirt and other problems that effect the skin.

The Hype
Automatic facial cleansing brushes are all the rage right now, with the best ones costing hundreds of dollars. Proactiv even tried to capitalize on the hype by offering their own as a bonus gift for trying out their popular acne fighting system.

The Cost
The Prosonic is $204 from their official site, but you can get it through other online retailers for far less. When you order from their main sales channel they will include 3 different brush heads, a cream for microdermabrasion, as well as a botanical cleanser, and they’ll back it up with a one-year warranty. Keep that in mind because you might actually need to take them up on their warranty if peer reviews are any measure of how well it’s built.

The nice part about it is that it has replacement heads, so once you get past the higher upfront cost, the cost of maintenance should be more manageable. The only question left is whether or not the unit itself can last long enough for you to replace the head that’s attached to it.

The Commitment
The point of facial scrubbers like these is that you’ll spend less time and do a more thorough job on your face than simply scrubbing by hand. The exfoliating action is supposed to make it so you get a deep cleaning without having to apply the pressure using your own elbow grease. It can sometimes be hard to get the leverage needed to scrub your face properly, and by adding some power to the situation the thought it that it will be easier to do.

Evaluation
The Prosonic is nearly universally panned by buyers who relay horror stories about being ambushed by the product during use. The complaints range from being shocked by the device, to having it literally blow up in their face. Far from negative reviews these almost read like warnings to stay away from it. If there were just a few incidents that might be understandable, but after analyzing the data the number of complaints is statistically significant, and there is a big chance that if you get this and use it you’d experience the same thing, or similar.

It’s one thing to have a product break down after months of wear and tear, but that’s not what happens with this. It’s been said that the wiring is faulty, or some other problems exists so that in a rather short time it starts malfunctioning, and the symptoms range from it only working at one speed, to it literally imploding and sending debris flying. This is the first time when one of our product reviews seems more like a public service announcement: beware of exploding facial cleaners!

But what about the people that say it works? What we’ve found from doing hundreds and hundreds of product reviews is that there is very rarely unanimous feedback on a product, unless that feedback has been doctored. It’s natural to think that there might be some units that function properly, just as there are sometimes defective units in a batch of otherwise good products. It would actually be fishy if there weren’t anyone saying it works well.

We’re giving this the Thumbs Down rating and advise against using it. Several reports from consumers say that it’s faulty, defective, and has the potential to explode during use. Since it’s meant to be used on the face this means it has the capability of exploding near your face. Not a good combination, and not worth risking your safety over. It’s not as if it’s the only fish in the sea when it comes to getting the job done. In fact it’s just one of several on the market.

Our Recommendation
There are other facial scrubbers out there that don’t have the manufacturing problems we’er seeing here. For example, check out this well-reviewed cordless facial scrubber that is a fraction of the price, makes essentially the same claims, and doesn’t have a long list of people saying it blows up when you use it. That’d be our pick!

What do you think? Does Prosonic work or not?

← Previous Does Mighty Thirsty Really Work?
⚅ back to blog
Next →Does Finulite Really Work?