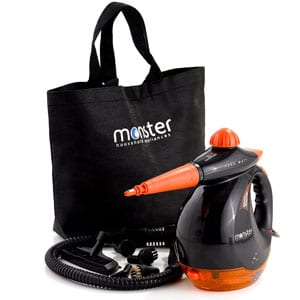 The amazing power of steam can be placed in the palm of your hand with the Monster 1200 Steam Cleaner. Or at least that’s what they’d like you to believe. It’s easy to see that steam would be a great way to clean and disinfect things around the home, but how good of a cleaner is it really, and does it actually disinfect things? We checked out some real world tests and are here to bring you the answer.

Overview
Steam cleaning systems have been around for decades, and have been a staple of as seen on TV products for quite some time. It’s easy to imagine steam being the perfect cleanser. It’s basically just super hot water, and when it has some force behind it it seems like nothing could stand in its way. It’s an eco-friendly way to get your house clean, or to remove stubborn dirt, grime, and other stains around the home. Well, that’s the theory anyway. The reality is that once you see it in action, these claims start getting put to the test.

The Claim
The 1200 in the title refers to the 1200 watts of power it claims to have. They say that it kills germs and bacteria in the kitchen and bathroom, and with the attachments you can clean the ceiling to the floor. First they say that you just have to add water to the Monster 1200 Steam Cleaner, but then they go on to state that you can add their Clean Blast solution to the bottom of the unit for extra disinfection.

If you think that you’ll have to wait ages for this thing to get going, they say that it only takes a minute for it to start spraying steam, and that each fill up of water gets you 30 minutes of use. They also claim that the last puff of steam comes out just as strong as the first, so you won’t have to worry about sputtering, or weak steam action.

With the Clean Blast added to it, there’s a button you can press so that you can use it on demand in places that need to be disinfected. The Clean Blast solution mixes with steam right before it comes out. They claim that this is used in hospitals to disinfect things there, that it penetrates deep into cracks and crevices, and that 99.99% of germs and bacteria are killed on contact.

They also say that it was from a manufacturing company in Italy, but they left enough ambiguity so that they don’t explicitly claim that the product itself is made in Italy.

The Hype
Steam cleaners in general get hyped up because they make cleaning look so fun and easy. There’s something about them that just connects to our core, it looks so believable that steam should be able to clean things that well, and leave things like new when it’s done, without damaging surfaces, and without the need for harmful chemicals. It just seems like a wonder fix.

The Cost
$66, free 10 piece accessory kit. Be careful, or you’ll get signed up for the auto-ship of the Clean Blast solution, they’ll send it to you for “free” but you just have to pay shipping and handling. Most likely they send it monthly and you have to call and cancel if you don’t want it.

The Commitment
Many people really like the idea of cleaning and sanitizing their home, but the actual doing it is another matter. All of us would like to live in a home that has just been purified with steam and is healthy and clean, but this involves actually taking the time to do a proper job of it, with or without a Monster 1200 Steam Cleaner. It does make it look easy, but you’ll still have to set the time aside to get all of those nooks and crannies in the bathroom, kitchen, and other common areas.

Evaluation
It’s hard to deny that the Monster 1200 Steam Cleaner is actually a pretty good little steaming unit. Compared to other similar sized models, and other cleaners at this price point, it’s a solid buy. However, there definitely is a gap between what you see in the infomercial and what plays out at home. Most likely the situation or problem area you have in mind will not be magically solved with it. They create perfect conditions for these cleaners during their TV spots, and it’s hard to replicate them at home.

However, it seems good at cleaning and disinfecting, but it’s up to the individual whether or not they want to believe the claims of killing 99.99% of bacteria and being used in hospitals.

The Monster 1200 Steam Cleaner works, but the only question is whether you’ll work it. The thought is nice, and the product is designed well, but as far as being a practical cleaning product that you’ll get a lot of use out of, we’re still a little skeptical. After its initial novelty wears off, and the excitement over sanitizing your house fades, it will probably be another forgotten addition to your home and just take up space.

Our Recommendation
If you’re big into cleaning, and have the patience for it, you might like using the Monster 1200 Steam Cleaner. If you’re at all a germaphobe, or just like things to be really clean and don’t mind putting the time in to get things done right, you’ll likely enjoy it. For others, it might not be the best purchase they ever made, and will likely find its place in storage or at the next garage sale.

Get a best deal on a Monster 1200 Steam Cleaner from Amazon.

What do you think? Does the Monster 1200 Steam Cleaner work or not?

8 Customer Reviews on “Does the Monster 1200 Steam Cleaner Really Work?”