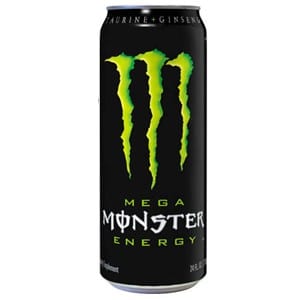 They say size doesn’t matter, but no one has told the makers of Monster Energy Drink. Their cans dwarf the best-selling Red Bull, but does quantity win the battle over quality? We put Monster to the test to see how they size up against the rest of the energy drinks on the market.

Overview
When Red Bull came out it totally opened up a new market for energy drinks. Before that it was only colas, Gatorade, or coffee. Now there was a new segment, drinks that were designed to give you a burst of energy so you can make it through the day, and perform at your job to your peak abilities.

Other than that their claims aren’t too over the top. Of course they say you’ll get a good burst of energy from drinking their product, but they do not say that it will last all day, or that you’ll be able to function better with it.

The Hype
There are so many spokespeople and celebrity endorsers for Monster Energy Drink that it’s hard to keep track of them all. It is one of the most heavily promoted drinks on the planet, which has created a lot of hype around it.

The Cost
You can usually pick up a single can of Monster for around $2. Many convenience stores will have specials when you buy more than one can. You can also find cases of 24 for cheap at places like Sam’s Club or Costco.

Evaluation
The Monster Energy Drink company wasn’t content to rest on their one product. They’ve created an entire catalog of beverages, each with their own unique twist to try and capture another sliver of the market.

Monster Energy – This is the original formula that started it all for them. It comes in the original oversized black can with the florescent green M on it.

Absolutely Zero – They are addressing the number one concern most people have with energy drinks: the calories and sugar. This contains no sugar, and no calories, but promises the same kick and burst of energy as the original.

Assault The main additive to this product is ginseng, an herb originating in China and popular throughout Asia. It is unclear what sort of ginseng they put into it, as there are various kinds, and also what sort of quality it is, and how much real ginseng root is in the drink.

Lo-Carb – Addresses the concern of so much sugar and carbohydrates in the original version.

Khaos – This product is half juice, so it can’t be that bad for you right? They say that it has the full amount of what makes monster energy drink work, so you’re still getting the full effects.

M-80 The 80 stands for the fact that this is 80% juice. But you’d better believe that they’re not putting high quality juice into their product because they know their core audience isn’t very concerned about their health. So you’re probably getting low-grade juice mixed with all the chemicals that go into a Monster Energy Drink formula, and you’re duped into thinking you’re being healthier.

MIXXD – This is a mix of several different juice blends, plus the original monster formula So it not only tastes good, but it also gives you the buzz that you’re looking for.

Dub Edition – We’re not exactly sure what they were going for with this variety, it seems to be their target market is urban youth, or DJs, this one’s a little mysterious.

Import – It appears that the only thing important about this version is the can. It’s got a resealable top and you’re supposed to be able to open and close it with one hand Making it pretty convenient.

Import Light – This seems to be the same concept of the resealable can, with its own specific flavor just with fewer calories.

M3 – All the power of a full 16 ounces of Monster Energy condensed into just 5 ounces. Not quite as small as 5 Hour Energy, but they claim it tastes better.

The Danger of Energy Drinks
Monster Energy drink isn’t a harmless beverage, and contains large quantities of sugar, caffeine, and other chemicals designed to give you a “rush”. The net result of drinking Monster Energy is that you are severely dehydrating your body and speeding up your heart rate.

It’s a great idea to take advice from Australia and the United kingdom on this one, they recommend to their citizens to limit your intake to just one can per day. For some reason in America they say you can drink three per day. This is a really bad idea. In fact, you should not drink this daily, and at most you could use it as a weekly pick-me up when you’re feeling super drained.

Of course Monster Energy Drink packs a punch, no one’s denying that.  They wouldn’t be able to stay in business if people didn’t get the feeling of increased energy from drinking it. However, this just gives you the “feeling” of energy, and you aren’t truly being energized at all. True energy comes in the form of healthy foods that contain vital nutrients your body needs. This product actually depletes your body of true energy, but amps up your vital signs so that you feel like it’s doing something.

When your body is running at its optimal levels you don’t need any quick fixes like Monster Energy Drink. The reason you feel run down and like you don’t have enough energy to get through the day is because your lifestyle needs some adjustment. By not giving your body the things it needs on a daily basis that eventually starts shutting down, and you’ll feel depleted and unable to do the things you need to do. Start making some small changes like eating healthier foods and getting regular exercise and your energy levels are sure to naturally increase on their own.

If you still are looking to get a boost, we recommend getting some 5 Hour Energy.

What do you think? Does Monster Energy Drink work or not?

← Previous Does Go Smile Really Work?
⚅ back to blog
Next →Does Commission Junction Really Work?