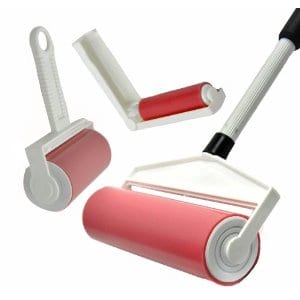 You might have seen the low budget Mr. Sticky Lint Roller commercial and ask yourself whether it really works the way it seems to. While you might not think that buying a lint roller is an epic purchase, with the Space Age materials they’re using these days, if you make the right choice it could very well be the last one you’ll ever need to get. Find out if this is it or not.

Overview
Lint is just a part of life, and if you own a pet, so is pet hair. How you deal with it plays a big part in how much of a hassle you think it is. If you go with an ordinary lint roller, you probably get fed up at how many times you have to go over the same spot to pick up a stubborn piece of lint or a fuzzy. You probably get tired of how fast a lint roller takes to load up with pet hair, forcing you to rip off a sheet and go on to the next one. They now make rollers that are super sticky, and are meant to never need to be replaced because they can be washed off and used again.

The Claim
The Mr. Sticky Lint Roller says that you’ll never need to refill it, and that it has a lifetime guarantee. They also claim to have been in business since 1991, and can prove it with an infomercial from way back when. But by saying you’ve had a reusable lint roller on the market for over 20 years, and it hasn’t been able to corner the market, aren’t you admitting that it doesn’t work as well as an ordinary one with disposable tape strips? And if it works for a lifetime, wouldn’t you eventually run out of a consumer base after all of these years?

The Hype
A lint roller is not going to magically change your life around, but not having to buy refills would definitely make a big difference cost-wise, especially if you like to use it a lot. These days it seems there are several companies all vying to be king of the hill when it comes to the last lint roller you will ever need to buy.

The Cost
The Mr. Sticky Lint Roller sells for $38, which includes shipping on all three roller sizes that you get. You end up getting the regular size Mr. Sticky, plus the mini sized one, as well as the large one for bigger jobs.

The Commitment
You might not have given too much consideration to your lint roller in the past, but if you have a good one you’ll find that you come up with more more reasons to use it. If you have one that you never need to refill, you might start using it for all sorts of things around the house, including dry spills of cereal and anything in powder form, as well as pet hair anywhere and everywhere it can end up.

Evaluation
The Mr. Sticky Lint Roller has gotten mixed reviews, with many people saying that it does work and is reusable, and others saying that it doesn’t work and isn’t worth buying. It is important to note that there are other lint rollers that look very similar to this one, and are being sold under the same name. If you’re going to give Mr. Sticky a try be sure to go through official sales channels so that you get the genuine article.

Although we couldn’t confirm it, we’re going to go out on a limb and say that their lifetime guarantee involves you paying some sort of fee in order to have them ship you a replacement unit. Of course, if the product is faulty you wouldn’t want to have to pay to receive a new one. And if it is truly guaranteed you shouldn’t have to.

How to Reuse Mr. Sticky
Some people have complained that it is not easy to use, because it is not easy to dry off. They have said that if you use a paper towel it will stick to it, and if you use an ordinary towel the fibers from the towel also stick to it, forcing you to rinse it off again. The trick here is to use a chamois cloth in order to dry it off. Something like the ShamWow works great for this task. This is because chamois cloth don’t have the kind of fibers that will stick to this roller.

The Mr. Sticky Lint Roller doesn’t seem to be able to measure up to its competition, or its claims. They are not the only lint roller on the block that is making the claim of being able to be used again and again. It all comes down to the sort of science that has gone into the sticky substance used to make it. The company with the best research and development will win this battle. It appears that they are producing essentially the same product they were 20 years ago, and haven’t done much to upgrade or enhance it.

Our Recommendation
We recommend going with Sticky Buddy over Mr. Sticky. Yes, their names sound like they would be next door neighbors in the land of lint rollers, but in this case one performs a bit better than the other. Sticky Buddy has the same features and functions, but excels at being sticky, and rinsing off more easily and being ready to use again more quickly.

What do you think? Does the Mr. Sticky Lint Roller work or not?

← Previous Does the HAAN Steam Mop Really Work?
⚅ back to blog
Next →Does the Babycakes Cupcake Maker Really Work?