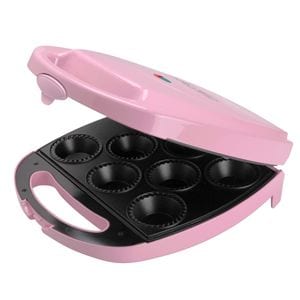 Thinking of taking cupcake making to the next level with the Babycakes Cupcake Maker? It’s basically using the same sort of technology as a George Foreman grill, by baking the cupcakes from both sides at the same time. So can you really get quality cupcakes from a small unit like this, and in a fraction of the time that it would normally take to make a batch?

Overview
There’s only a few things that can be considered staples to the American dessert menu. Who doesn’t like a good cupcake? It’s like a little mini cake all to yourself. But baking a batch of cupcakes can be just as involved as making a cake, which might mean that you don’t make them as often as you would like to. If you love the taste of cupcakes but hate the waiting part, you’re probably in need of something like this, but only if it actually works. There’s only two ways this can go, either it makes delicious cupcakes that your entire family will enjoy, or it’s a giant flop.

The Claim
The Babycakes Cupcake Maker says that it can produce amazing tasting cupcakes from its little unit in just 5 minutes. It pops them out 8 at a time, and says that it comes with all of the accessories you’ll need to produce great results, without having to pay extra for add-ons. Because of its nonstick coating, they say that you can bake cupcakes using paper baking cups or not, it’s your choice.

The Hype
With a name like Babycakes they are definitely going for the cute points here. Watch yourself or you might get swept away by the entire product line that they offer, including things like waffles on a stick, mini doughnuts, cake pops, and other baked good delights.

The Cost
You can pick up a Babycakes Cupcake Maker for $40 or less from online retailers like Amazon.

The Commitment
You won’t have to fire up the oven in order to make cupcakes anymore, so you don’t have to worry about waiting for it to preheat, or heating up your whole kitchen just to make a batch of cupcakes. Your commitment level is pretty much the same as making cupcakes the old-fashioned way, since you still need to prepare the batter, but this allows you to set and forget it and not worry about under or over cooking your cupcakes.

Evaluation
The Babycakes Cupcake Maker is getting great reviews from people that have tried it out in their own homes. It functions the way you’d expect it to, and with the included directions, you will be up and running with it in no time and have your first successful batch of cupcakes in your mouth before you know it. Of course there are competitors out there that try to accomplish the same task, but they just don’t measure up to the sort of quality results you get with this. Since you’re able to use your own batter you have a lot of control over what you can make, and you’re not forced to buy any specific cake mix.

If you’re ever stuck for recipes, they have a bunch of ideas you can steal from their website, both ones that the company came up with, but also several that actual users have submitted. If you come up with their own concoction you can feel free to add it to their database so others can try it themselves. It’s currently the only company we know of that is creating this sort of community around designer desserts. You may even find that you can make a hobby out of creating photo worthy cupcakes and posting them to the forum.

Cupcakes, Pies, and Tarts, Oh My!
One feature that isn’t really discussed too much is that this unit can also make mini pies and tarts, which is pretty impressive considering that these are tough to make, and often get sold at a premium from your local bakeshop. This makes it a pretty versatile unit, and something that you might end up using more than just a simple cupcake pan. When we first looked at the price we thought it was a little much for something that just made cupcakes, but after delving into it a little further it is not a bad price for something that can be used to make all sorts of desserts.

We recommend getting the Babycakes Cupcake Maker if you’re a cupcake monster, or would like to be. But be careful, because if you have one of these in your home there’s really never a good reason not to make a batch of cupcakes. You might find yourself coming up with reasons to make them at first, and then just making them for the heck of it down the road. Even if you don’t end up using it to make pies and other baked goods, you’ve got to admit that popping out eight cupcakes in 5 minutes is pretty impressive.

Our Recommendation
But why make ordinary sized cupcakes when you can make a big ole one and stuff it with your favorite filling? That’s exactly what you can do with the Big Top Cupcake maker. If you’re a creative type this is a way to unleash it, and provides a bigger canvas than standard sized cupcakes. If you love your desserts, you would definitely want to have both of these products in your baking tool arsenal.

What do you think? Does the Babycakes Cupcake Maker work or not?

26 Customer Reviews on “Does the Babycakes Cupcake Maker Really Work?”