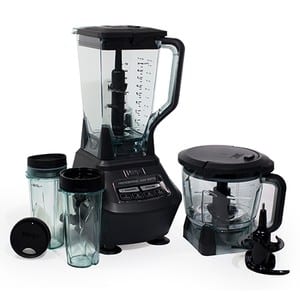 Ninja Mega Blender may be right for you if you’re looking for a complete set that provides the power of the higher end models but without the higher end price point. Ninja has already built itself a solid reputation for making powerful blenders at affordable prices, so let’s see if they can keep the streak going.

Overview
We’ve already checked out the original Ninja Blender that comes in around the $100 price range, and has plenty of positive reviews. This would be for those that want to have a more complete system in place to tackle more complicated recipes and dishes.

The Claim
The Ninja Mega Blender is not without its share of claims. They say it can turn whole fruits and vegetables into nourishing juice, that it can make up to 2 pounds of dough in under a minute, and that it can chop up food without turning it to mush so you don’t have to spend time on the tedious task of chopping and dicing. And of course it can do all the things that a top blender should, including making amazingly smooth smoothies by just adding fruit and ice to it.

The Hype
Aspiring chefs like to mimic the pros as best they can, and that means equipping their kitchens with everything from the best knives, to the best cookware sets, right down to the blender and mixers. The more you’re able to do with food, the more you’re able to impress those that eat it. So whether you just like to play around as a hobby, or whether you’re thinking of using your culinary skills as a profession, it comes down to how quickly and efficiently you can complete the tasks required in a recipe.

The Cost
The Ninja Mega Blender clocks in at $160, which in the world of blenders is not very much at all. When you’re talking about a blender that also mixes dough, is a food processor, and juices for you as well, this price almost isn’t fair. If this can replace all of those gadgets, or take away the need for you to buy them, it’s a virtual steal. Not to mention freeing up a ton of counter space. And since the Ninja looks sleek and professional you really won’t mind keeping it out and on display, ready for use when you need it.

The Commitment
You’ll want to make sure that you’re already spending enough time in the kitchen to justify getting this. Often it’s easy to fall into the trap of “If I get it, then I’ll use it more…” where it’s better to get into the habit first and then upgrade your tools. If you’ve noticed that more and more recipes are beyond the scope of your current utensil set, then start saving them in a special folder and when they reach ten or more you know that you’re ready for more serious toys.

Evaluation
The Ninja Mega Kitchen System has some stiff competition from the likes of Vitamix and other more expensive blenders that have multiple capabilities and attachments. To be able to stand up and hold its ground in an industry like this where at-home chefs are very discerning and don’t settle for products that don’t get the job done says a lot. One feature that got our attention was that you’re juicing the entire vegetable, so there’s no need to separate the pulp from the juice, it blends it so fine you don’t notice it. Plus you’re getting all of the fiber from the fruits, which is half the reason why they’re doctor recommended.

Unless you’re a bread nut, the dough mixing might be the one feature that you don’t use very often. But if you had the means, maybe you’d find reasons to use it more, and you may even be tempted into getting a bread maker. The food processing capability is something that a lot of chefs have to get used to. It’s like having your own prep cook in the kitchen, and you’ll be amazed how much time it frees up when you don’t have to attend to the mundane task of chop chop chopping and dice dice dicing. It can even mince what needs mincing, easily one of the most mind-numbing tasks of any recipe.

The one thing that most reviews of this blender have in common is that it packs some power, which comes in handy if it’s put to good use. You have to attach sharp and strong blades to that power in order for it to be truly useful, and that’s what we’re seeing here. It’s one of those rare instances where low price meets high quality and a well-made design and product all over.

The Ninja Mega Blender has earned our Thumbs Up review, as they keep knocking them out of the park. This system gets great reviews from users, who praise its ability to switch from one task to another and then back again without a problem. They talk of its value, saying that it could easily be at a price point much higher than what it is. If you’re serious about having all of the gadgets, you can consider going with some of the upgrades, which are also reasonably priced.

For example, for an extra $140 you’d have literally every single attachment they make for this, and be able to make ordinary and crinkle cut fries, as well as have cups to hold your smoothies and a storage case to keep everything handy. They break it up so you can order the package that’s right for you, so you’re not roped into anything extra. And of course they supply you with everything you need if you want to stay at the $160 price tag.

Our Recommendation
If you currently don’t have anything like this, grab this now. The raw power it provides gives your kitchen some instant credibility, and you’ll be able to easily do things that you couldn’t before, opening up a new world of possibilities as far as which recipes you can attempt, and pull off.

What do you think? Does the Ninja Mega Blender work or not?

← Previous Does the Watermelon Garden Really Work?
⚅ back to blog
Next →Does Natural Solutions to Things That Bug You Really Work?