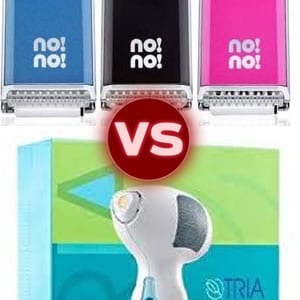 The choice between No No Hair Removal vs. TRIA Laser is not so easy to make. There are a lot of conflicting reviews on each product, so it’s hard to tell which ones are genuine, and which device actually performs like the infomercial. We’ve taken a close look at each one, evaluated the ratings for them both, and are here to size them up for you one-on-one.

The Tale of the Tape
There’s a widely recognized need for an answer to shaving and waxing, as neither one really solves the problem of unwanted hair. If you’re tired of shaving your lets or underarms you’re looking for a way that does it with the least amount of pain, the smoothest and longest-lasting results. You’ll also want something that produces the same results again and again, giving you consistency that you can rely on.

No No Hair Removal Recap
No No has both the benefit and the curse of being the first of a new line of hair removal products to hit the market. They get the benefit because when it was first released there wasn’t really anything going up against it that had the same kind of features. But now that it’s been around for so long and several thousands reviews have come in on it the picture is getting a little clearer as to how well it works when put to use in the real world. See our full review of the no!no! hair removal system.

TRIA Laser Recap
TRIA is trying to make the case that they’ve taken the same sort of lasers that hair removal salons use, and packaged it so you can now use it at home. They bring up the fact that they’re FDA approved, and warn against being duped by other systems that claim to be using lasers, but really aren’t, and therefore can’t replicate the same results. See our full review of the TRIA Laser hair removal system.

Cost Comparison
At $395 the TRIA laser system is considered a heavyweight. Although this isn’t as much as you’ll pay for professional laser treatments in a clinic, it’s still a chunk of change for the convenience and privacy of being able to use it at home. The No No has a suggested retail price of $250 but can be found for $200 or less at online retailers, making it the less expensive choice between the two.

Where They’re Similar
The major similarity that these share is that they’re both promising the same features. That you don’t have to shave or wax anymore, that the process is relatively painless, or at least not as painful as waxing, and that over time your hair will grow back slower and slower. They both add a bit of hype to the equation by making claims about how they work, and why they work, and getting into the science or pseudoscience behind the “magic” of their new technology.

Where They’re Different
The TRIA system is using lasers, where the No No system doesn’t, it uses a system that is supposed to heat up the hair to the point where it can’t sustain itself anymore and falls out. The TRIA system claims to give permanent results, which is more than what most hair removal clinics will guarantee. In fact, many laser treatment facilities are now calling it hair reduction rather than removal, and are not quick to say that the results will last forever.

Final No No Hair Removal vs. Tria Laser Match-Up

The TRIA costs more and gets better reviews than No No does, but it’s also got its share of drawbacks in that there are just as many people chiming in to say it doesn’t work as those that say it does. The No No created a lot of hype for itself with it’s 30 minute long infomercials repeating again and again how well it works with a group of women sitting in a circle and lavishing praise on it. But when actual people try it out at home they don’t have a lot of nice things to say about it at all.

Both products have been on the market long enough to get a statistically significant amount of data to see how actual users are doing with them. This is where the fight gets interesting because neither contender is really bringing their A game. Most No No users say it’s a waste of time and money and they regret making the purchase. TRIA fares a little better with almost an even split of positive and negative feedback.

With the price tags for each of these, we’d be looking for nearly unanimous feedback saying that it works really well. Since we’re not getting that from either gadget, we’d say that this is a draw: you probably won’t be happy with either one, and will have buyer’s remorse for spending so much.

And the Winner Is…
In a surprise victory we have a last minute entrant that comes by and beats out both the NoNo and the TRIA in terms of user satisfaction and effective results: The Silk’n Flash & Go! Why settle between two products that don’t really produce consistent results when you can get something that promises the same benefits and has a higher number of people rating it favorably? At $250 it weighs in at less than the TRIA and is priced right at the level of No No. See our full review of the Silk’n Flash & Go.

What do you think? Which Works Better or No No Hair Removal or Tria Laser?

13 Customer Reviews on “No No Hair Removal vs. TRIA Laser: Which Works Better?”