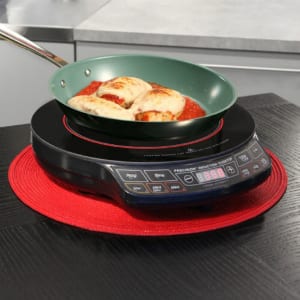 The NuWave Precision Induction Cooktop looks remarkable, and if it works half as good as it seems to it’s going to be a great buy. The idea of being able to have a cooking surface that is cool to the touch yet heats the pan is pretty irresistible. But how well does this hold up in real world tests, and what are people saying about it?

Overview
In the future perhaps all homes will have stoves that use induction heating to cook with. It makes a lot of sense to heat up just the pot or pan you’re using, and not the general area around it. However, at this juncture it seems that the best thing to do is just bring in an electric and portable induction cooktop like this. That way you can put it where you need it, and it offers an additional way to cook in the kitchen, but can also travel with you, or be used outside.

The Claim
They say that the NuWave Precision Induction Cooktop uses up to 70% less energy, which is great considering that the average stovetop wastes a lot of heat that doesn’t end up helping to cook the food. Electric or gas, both are inefficient ways to heat a metal pan because they attempt to transfer the heat, and much of it gets wasted in the process.

The Hype
This gets promoted pretty heavily through their infomercial. Perhaps one of the coolest features on it is that it’s cool to the touch. To prove it they have a pot of boiling water with a wedge cut out of the pot so people can touch the cooking surface right next to the pot. They also show half a frying pan with an egg frying on one half and raw on the other.

The Cost
The cost of the NuWave Precision Induction Cooktop is causing some confusion. It’s advertised as three easy payments of $33.33, which is not the issue. The issue arises from the inflated shipping charges on all of the “free” items. This is often a tactic used by manufacturers to keep their advertised price low, but make up for it at the time of the sale. If they said the cooktop was $200 a lot of people would pass on it, even though it works great and is worth the price.

The Commitment
This should represent easier cooking, since you will be able to set the device a certain temperature and you won’t have to babysit foods by constantly stirring sauces so they don’t burn, or constantly turning meats so they don’t char.

Evaluation
The NuWave Precision Induction Cooktop is winning over users with its performance. It’s a shame that the ordering process is getting in the way of people loving this and raving about it. Keep in mind that you are going to need to use pans and pots that are compatible with induction cooking. If you want to use stainless steel, it will have to be a higher grade, and you can test it by seeing if the bottom responds to a magnet. Cast iron pots and fry pans should work well.

Being able to set your cooktop to the exact degree you want it is amazing. You just can’t get that type of precision with a gas or an electric stovetop. It makes it great for things like omelets, and cooking meats, or making sauces. It’s also nice for things you cook a lot because you can find that perfect temperature and jot it down so you get consistent results each time. And since it is only heating the pot or the pan, there’s no wasted energy. It’s also safer than a conventional stove because there’s less surface area to burn yourself on, you just have to mind the pot or the pan.

When you’re running a business there are two problems you don’t want to have. Not enough sales, and more sales than you can handle. It seems that the folks at NuWave are in the weeds when it comes to how many orders they have, and whether they can fulfill them. You’d think after having success with the NuWave Oven that they would have their operations streamlined, but it seems like they weren’t expecting such a response. Some people mentioned that they have hundreds of complaints with the BBB, but that doesn’t necessarily mean that they’re not a good company, it just means a lot of people were disappointed.

The NuWave Precision Induction Cooktop is getting a Try rating from us, because if you peer through all of the hoopla surrounding their shipping charges and inability to fulfill orders you’ll see that the product itself is getting good reviews and people are happy with the way it performs. It’s easy to mistake frustration and disappointment for not getting your order in a timely manner as something that distracts from the product, but as far as it working, and cooking the way it’s shown with all of its features, it appears like they have a winning product here.

Our Recommendation
It seems that at the moment they are inundated with orders, and trying to catch up on backorders. They appear to be genuinely trying to dig themselves out of the hole and fulfill all orders. We’d suggest waiting a bit until they are on top of their game. Their Facebook page seems to be updated regularly, so when you see things calm down on their Timeline, it would be a safe time to place your order.

What do you think? Does NuWave Precision Induction Cooktop work or not?